Jeep
Where in the world is Dan Grec? 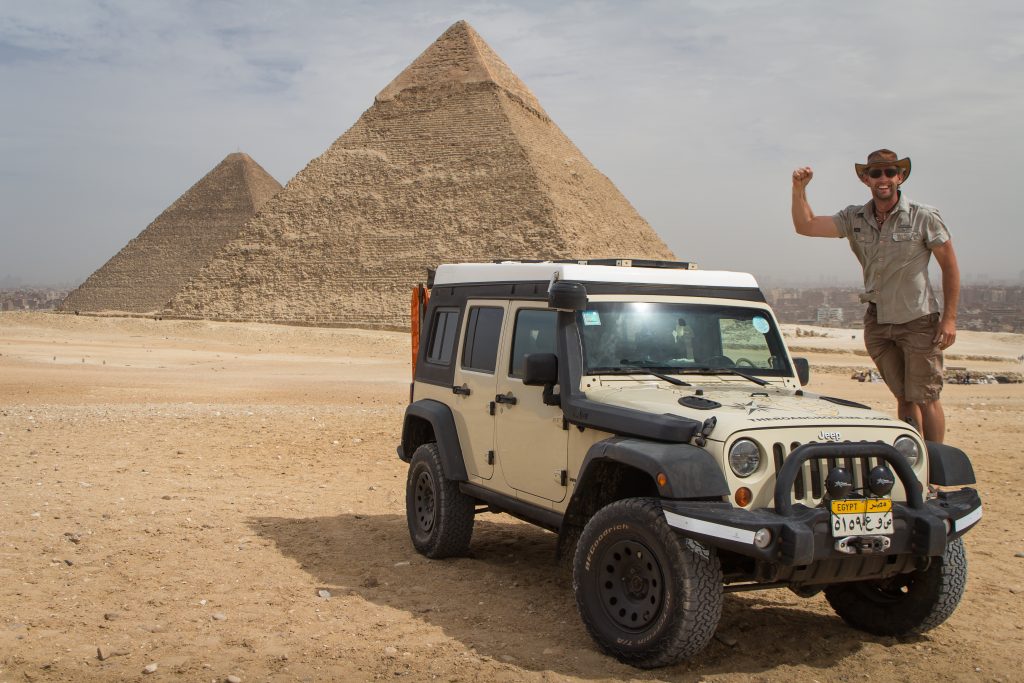 Dan Grec at the conclusion of his journey around Africa in Jeep Wrangler.

Dan Grec has spent the past three years driving the road trip of a lifetime in a Jeep® Wrangler.

Starting in 2016, Grec, an overlander (which is described as someone who is a self-reliant traveler who ventures to remote destinations), drove his customized 2011 Jeep JK Wrangler Rubicon 4-door 53,500 miles through 35 countries in Africa, beginning in Morocco, down to South Africa, then back north to Egypt.

Along the way, as he explored Africa, visited remote places and met interesting people, his Wrangler was up to the challenge.

“I wanted to get to remote lakes, rivers and beaches and the Wrangler performed brilliantly,” said Grec, an Australian who most recently has been living in Canada and worked as a computer software engineer and saved his money before trading his desk job to travel and explore. “I drove it everywhere that I wanted to go. It never stopped. It never refused to drive over something.”

Grec recently shared his experiences with FCA employees during a return visit to the company’s Auburn Hills headquarters, bringing him full circle as he visited before leaving for Africa.

Grec’s visit to Auburn Hills allowed him to meet with Jeep engineers and to share his experiences from driving his current Wrangler around Africa, as well as a previous trip in a two-door Wrangler from Alaska to the southern tip of Argentina.

For his most recent trip, he took a standard Wrangler with a stock driveline, stock engine, stock Rubicon axle and added a number of camping modifications, such as a pop-up roof, a refrigerator, solar panels and batteries, along with a lifted suspension and bigger tires and wheels. This gave him both living accommodations and the ability to explore deep off the beaten path.

“This Wrangler was flawless throughout 53,500 miles,” he said. “It never once let me down. It never once left me stranded on the side of the road … so in that regard it was fantastic.”

He did have to tend to normal maintenance along the way with oil changes, tire rotations, changing brake pads and tending to normal wear and tear.

Along this journey on winding mountain passes, through thick brush, across bodies of water and a wide range of road surfaces, he was often welcomed by the locals.

“People think it’s dangerous, but actually 99% of the people there are really friendly and really kind,” said Grec, who said his biggest takeaway from Africa was how kind people can be all over the world. “I was blown away by the generosity of the people that would come up to me and offer me help and assistance for no reason, just because they are friendly people.”

Grec is now back in North America and still driving his Wrangler.

He is visiting various Jeep festivals to talk about his trip, show off his customized Wrangler and discuss his book “999 Days Around Africa: The Road Chose Me,” which he wrote about his journey and includes a number of photos of his Wrangler in picturesque locations.

“The Jeep really gives perspective and scale to the place I’m in,” said Grec. “It’s a fish-out-of-water tale where this modern vehicle is exploring through remote Africa. She’s the good looking one, I’m just the photographer.”

And after traveling tens of thousands of miles, what’s the next adventure for Grec?

“To be perfectly honest, I don’t know,” he said. “I don’t have a plan. I’m still digesting this one, but I’ll definitely keep you posted. I’m certain there’s something in the works.”

To read more about Grec’s trip around Africa, and to view photos and videos from his trip, visit his website theroadchoseme.com .