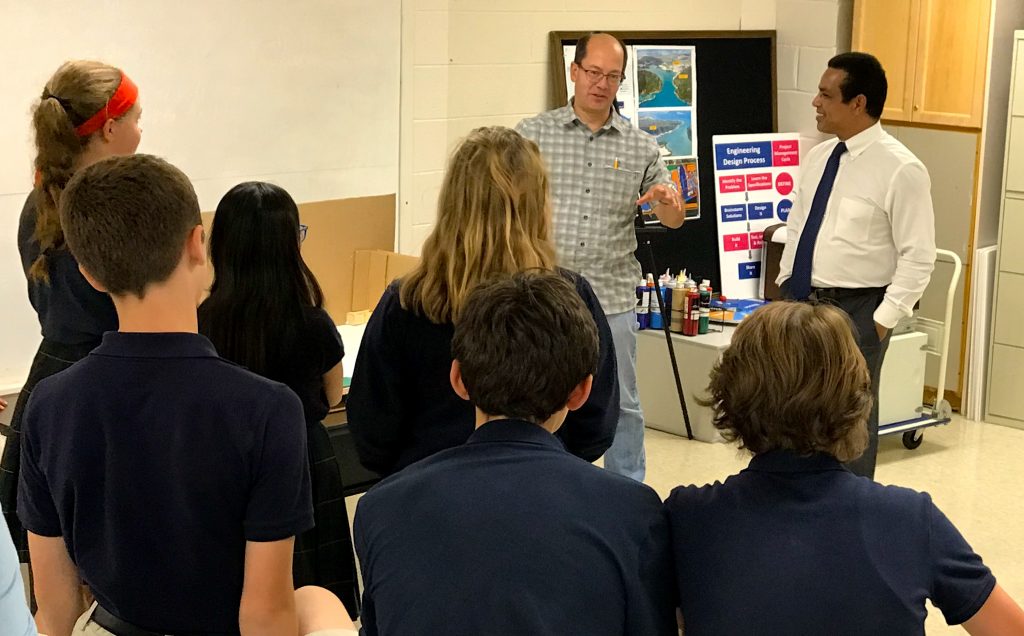 Students at St. John Lutheran School in Rochester, Michigan, are utilizing a variety of sources to research and prepare for this year’s Future City competition, a project-based learning program where students imagine, research, design and build cities of the future.

This includes tapping into the knowledge and life experience of FCA engineer Pedro Santiago.

Santiago, a native of Puerto Rico, shared anecdotes and photos of growing up in Puerto Rico, described the various natural features of the island and his personal experiences with hurricanes.

This in-depth discussion provided valuable information to the seventh and eighth graders as they begin to design a futuristic city in Puerto Rico that can withstand, and recover from, the impact of a natural disaster.

“I think it might be helpful for the kids in thinking about solutions they may want to explore,” Santiago said of his presentation to the students, which also came during Hispanic Heritage Month. 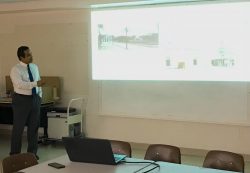 Not only does he enjoy the opportunity to help students, he appreciates the chance to give back to the community.

“Ever since I joined Chrysler, I feel that it’s something that adds value to my job,” Santiago said. “You want to do these things for the youth.”

Santiago was invited to speak to the students by fellow FCA employee William Abramczyk, global liaison for safety investigations for FCA, who has volunteered his time, expertise and assistance to the St. John Future City team, which included two of his daughters, for nearly 12 years.

During that time, St. John has twice finished in first place at the national competition. The team also has finished in fifth place, third place and second place nationally.

“The kids learn how to deal with people, negotiate positions and they have to follow directions,” said Abramczyk of the variety of skills the students learn. “We make sure everyone gets their ideas heard. They also have to do their research.”

Their research into creating a future version of Guanica, Puerto Rico, includes speaking with people such as Santiago. 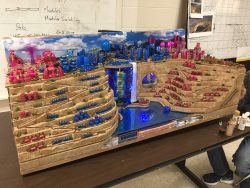 The Future City model built by St. John Lutheran School for the 2018 competition.

Armed with their research, the students are working to identify current problems with the electric grid and are following a timeline they created for their project. The team also has deadlines to create their project plan; build a virtual city; write an essay about their city and a solution to this year’s challenge; construct a physical model of their city using recycled materials and rehearse their seven-minute presentation about their future city and solution to the challenge.

Some of the personal stories and descriptions of Puerto Rico that Santiago shared with the students may be integrated into their project, including:

“They are not there to keep people in or keep people out, it’s actually to keep debris from hitting people in hurricanes,” Santiago stated. 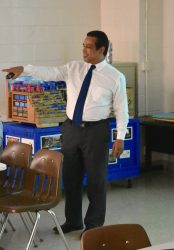 Santiago also shared his personal experience with the destructive pair of hurricanes that hit the island last year. Hurricane Irma made landfall three days after he arrived in Puerto Rico for a vacation. The storm knocked out electricity and water, and he couldn’t leave for a week. When he was finally able to get a flight out, it was one of the last flights from the island.

“If I had to wait one more day, I would have been stuck there for Hurricane Maria and who knows how long it would have taken to get back,” he said.

While his family was unharmed, the storm caused significant damage to hospitals, schools and even took out the radar at the airport. As the U.S. territory continues to rebuild and recover from last year’s hurricanes, and to prepare for future storms, Santiago praised the students for tackling a real-life subject that is currently being addressed by adults.

“There are real engineers and scientists who are thinking about just that,” said Santiago. “The challenge you guys are doing is great.”