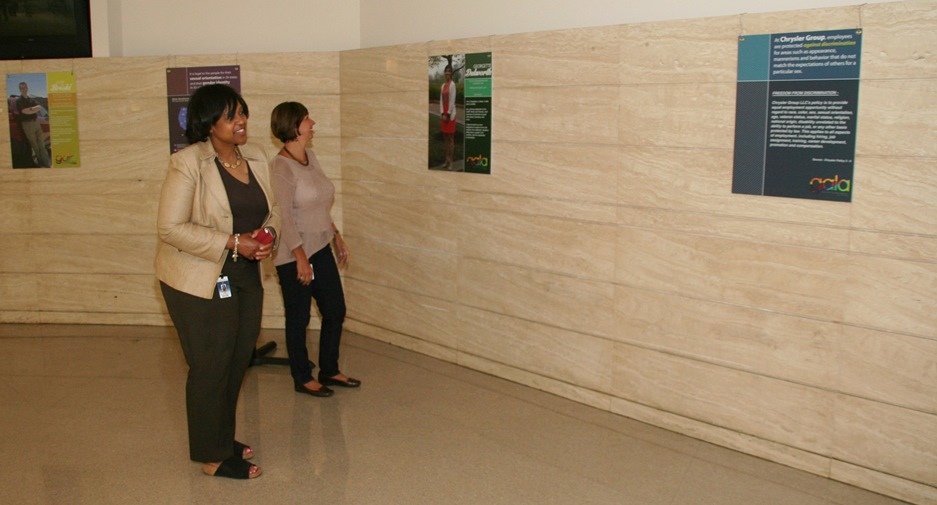 Employees Linda Miller-Boswell (left) and Maureen Rose browse some of the Faces of GALA posters at one of the two locations the exhibit is displayed at Chrysler Group headquarters, Auburn Hills, Mich.

The spirit of inclusiveness fills the halls of Chrysler Group headquarters this month as the company celebrates the vibrancy of its lesbian, gay, bisexual and transgender employees and its allies.

The exhibit runs through the end of June and is comprised of 15 poster boards, with each board highlighting a different GALA member, including GALA allies (a Chrysler Group employee who openly supports GALA). The Faces of GALA will be displayed in two locations at Chrysler Group’s headquarters in Auburn Hills, Mich. Each poster board features a photo of the GALA member, his/her name, job title and a quote about being a part of the GALA community.

To some, the exhibit’s concept may seem simple, but GALA members are confident that by making themselves visible with Faces of GALA, they will be able to convey a deeper human message: They are just like everyone else.

“Often, in the media and in Hollywood, members of the LGBT community are portrayed in a certain light, to fit a certain stereotype,” said Curt Briski, an Innovation Awareness and Training Manager at Chrysler Group and a board member of GALA. “Faces of GALA shows that we are all on the same human level; we are your co-workers, we’re the person that sits in the cube next to you, your friend, or the person you always go out to lunch with.”

Moreover, Briski and other members of GALA hope to reach other Chrysler Group employees who are fearful of being open in the workplace.

“Everyone has their own individual comfort level which is absolutely fine, but we want to make it clear to everyone that you don’t need to hide who you are,” Briski said. “We have an open and inclusive corporate culture where our LGBT employees can feel safe. Even if Faces of GALA can help one person to be a little more open, it will make our efforts worthwhile.”

Chrysler Group has a longstanding support of LGBT employees, communities and issues; however many members of GALA feel now more than ever, it is the right time to share their pride with others in the company who are open or willing.

“I’m proud of what Chrysler Group has achieved in creating a work culture that is diverse, respectful and inclusive,” said Gregory Hawkins, an engineer at Chrysler Group, who serves as chair of GALA. “It makes me as a LGBT employee feel valued and comforted to know that my Company stands behind me and is committed to supporting projects like our Faces of GALA exhibit.”

Last weekend, Chrysler Group sponsored the parade portion of the festival, as well as an interactive product display including the new Chrysler 200, Jeep® Cherokee Limited and Fiat 500L. Chrysler Group also provided the Grand Marshall vehicle – a 1967 Plymouth Fury – that Grand Marshalls April DeBoer and Jayne Rowse, and their children, drove during the parade.

Despite the rain, the two-day festival enjoyed record attendance with more than 45,000 attendees.

To view more photos from the festival check out the photo gallery on gaywheels.com

Chrysler was a leader among U.S. employers in providing domestic partner benefits to its employees in 2000. In 2013, Chrysler Group was among a small group of leading employers to achieve a perfect score of 100 percent on Human Rights Campaign’s (HRC) Corporate Equality Index. The HRC is the educational arm of the Human Rights Campaign Foundation, America’s largest civil rights organization, and is dedicated to achieving LGBT equality. The Company has achieved this benchmark eight times since it was established and, until recent years, Chrysler Group was the only automaker to consistently achieve a perfect CEI rating.

Chrysler Group also is a member of the Michigan Competitive Workforce Coalition seeking an update to Michigan’s anti-discrimination law to prohibit discrimination because of sexual orientation or gender identity.