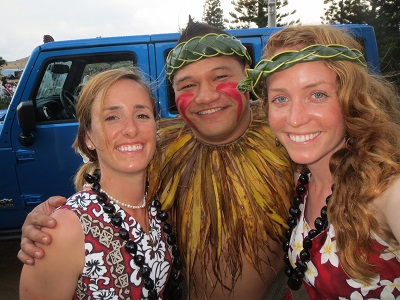 “We are the only people in the United States to have done this!” I told Ashley as we boarded our non-stop flight from Anchorage to Honolulu. “They do run a daily service for a reason,” she dryly retorted.

Nonetheless, our excitement and conscious decision to travel from Alaska (No. 49) to Hawaii (No. 50), in that order, just to have an adventure was worth the thought!

Nothing is more appropriate than coming from near the Arctic Circle than having a Jeep® Wrangler Unlimited Polar Edition! This limited-run model built on a high end Sahara has all of the great Jeep Wrangler “Go Anywhere, Do Anything,” components such as the legendary Trail Rated 4×4 capability (which we in intended to test on the beach), as well as the powerful 3.6L V6 engine. Exclusive to this model includes the power dome hood, body-color hardtop, Rubicon rock rails and Mopar accessories such as the black fuel filler and available body-color hard spare tire cover. There are many other wonderful features, but some of what we loved the most for the Hawaiian climate were the leather-trimmed seats with pearl stitching and the heated front seats, great for leaving a night luau!

We took our Polar Wrangler to meet the Chief! Chief has a great story. Originating from Savaii, Samoa, Chief Sielu (above) learned survival skills, such as taking care of his family! The youngest of 8, he has now extended his Samoan family and culture to his performing ohana (family), as well as his fire-knife dancing skills. The honor of becoming a chief is bestowed upon those who show exemplary knowledge of the culture, education, working with the community, and support for its leaders.

We saw this most directly through the continuation of the culture when we met Dre Manumaleuna. When we asked Dre to jump, he said, “I can jump real high!” He has got the Jeep spirit! He’s friendly, invested in his heritage, and talented. When inquiring about his skills with fire and why, he said, because “chicks dig firemen and fire dancers!” We know that his ties to the Somoan community are much deeper than pleasing his many adoring fans, but we were impressed, and we thank him nonetheless for sharing a little bit about his heritage with us.

Our Jeep Wrangler Polar Edition had a great seat at Chief’s Luau also!

We took our Jeep Wrangler on a field trip! First we drove the coast to Sandy Beach, the popular local beach with a massive shore break.

The next morning we discovered a new favorite spot at Koko Crater Botanical Garden, a 60-acre hidden spot that was first established in 1958. During the right season, the plumeria and bougainvillea as you enter the crater shower the floor and paint the sky with fuchsia, tangerine and yellows. There are 500 trees and about 200 species on the 2-mile loop hike. A favorite native tree is the wiliwili tree. There are four other botanical gardens maintained by the city and county of Honolulu Department of Parks and Recreation. We suggest if you go, go to them all!

Our final must-do was the Pali Highway. For an on-road adventure we traveled, Route 61, which connects the downtown to the windward side of O’ahu. The Old Pali Highway constructed in 1845 is noted by Hawaiians as a place with strong spiritual connections. There are numerous ghost stories. Once used as an ancient foot pass, it was the site of the bloodiest battle in Hawaiian history. King Kamehameha I conquered the island of O’ahu in 1795! During a key battle over 400 solders were driven off the edge of the cliff to their deaths nearly 1,000 feet!

The current road built in 1959 has a turn off called The Pali lookout. It has views of the Ko’olau Mountain, located at the head of the Nu’uanu Valley. Here you can see Kane’ohe. The trade winds are very strong, upwards to 40 miles an hour. It is said that these strong winds are angry Hawaiians.

It is said that the mo’o wahine or lizard woman dwells on the Pali. She appears as a beautiful woman who leads single male travelers over the edge of the cliff! A man alone in his Jeep Wrangler should never carry pork over the Pali at night. Bachelors have reported that their cars have mysteriously stopped on the Pali and would not restart until the pork was removed from their car. The story continues, but the rest is best tested in person!

We really didn’t want to leave state #50. This concludes our travel log of #49 and #50, because as Jeepers, we had a great time doing it! There is actually only one thing better than paradise with your best friend. Overlanding!!

Until next time, get ready to go “OVERLANDING” with us!

We’ll see you out there!!