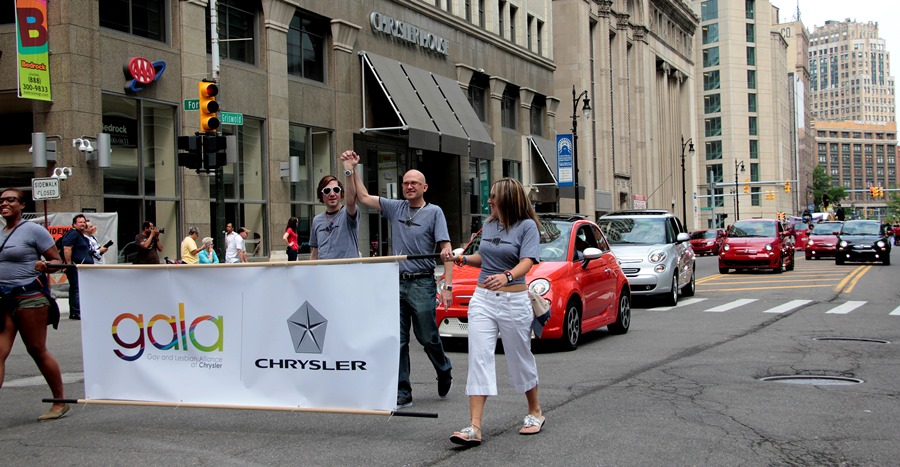 As with last year (photos above and bottom) and past years, Chrysler Group and the FIAT brand are again major supporters of the Motor City Pride parade and festival.

Each year at the beginning of June, Hart Plaza in Detroit is blanketed in the colors of red, orange, yellow, green, blue and purple. The display celebrates lesbian, gay, bisexual, and transgender (LGBT) culture at Motor City Pride, the largest LGBT gathering in Michigan.

The rainbow flag is a sign of diversity and inclusion, and is proudly displayed across the city to show unity with the weekend-long event.

The weekend festival shows the energy and vibrancy of the community and promotes equity and fairness as a means to improve the economic competitiveness and quality of life in Michigan.

And, even if you’re not a member of the LGBT community, you are all invited!

Chrysler Group LLC has participated in the festival in recent years to celebrate its longstanding support of LGBT employees, communities and issues.

Even as far back as 2000, Chrysler Group was a leader among U.S. employers in providing domestic partner benefits to its employees. In 2013, Chrysler was among a small group of leading employers to achieve a perfect score of 100% on Human Rights Campaign’s (HRC) Corporate Equality Index.
The HRC is the educational arm of the Human Rights Campaign Foundation, America’s largest civil rights organization, and is dedicated to achieving LGBT equality. The company has achieved this benchmark eight times since it was established and until recently, Chrysler Group was the only automaker to consistently achieve a perfect CEI rating.

Chrysler Group also is a member of the Michigan Competitive Workforce Coalition. The coalition seeks an update to Michigan’s anti-discrimination law to prohibit discrimination because of sexual orientation or gender identity.

Chrysler Group’s gold sponsorship of Motor City Pride this year was provided on behalf of its LGBT employee resource group, the Gay and Lesbian Alliance (GALA). This year, Chrysler Group is sponsoring the parade portion of the festival, as well as an interactive product display.

Bernadette Bennett was the co-chair of GALA’s predecessor, People of Diversity at Chrysler, and has had a unique view of the growth of the festival and Chrysler’s commitment.

“It’s great to see how the festival has grown over the years, and the increasing support it receives from the community and from corporations like Chrysler Group,” Bennett said. “Chrysler Group employees are proud of our vehicles. Today, we go to Hart Plaza and promote those vehicles … with 1,000 or more potential customers at Pride. It’s very exciting!”

Current GALA President Greg Hawkins added, “Because of the nature of the LGBT culture, you may not be comfortable coming to Pride if your company is there and there are only one or two people at a booth. But now we have so many employees involved. Employees who are not out at work see us and also want to get involved.”

At this year’s festival, Chrysler Group is featuring the 2015 Chrysler 200C, 2014 Jeep Cherokee Limited and the 2014 Fiat 500L. Visitors to the Chrysler Group display can enter a drawing to win $45,000 toward the purchase of a new Chrysler Group vehicle.

Motor City Pride through the years – A look back

Detroit’s first LGBT pride event began as a march and rally, called “Christopher Street Detroit ’72.” It was held in downtown Detroit, Saturday, June 24, 1972. A march and rally were then held annually until 1977, when the event moved to Palmer Park for a rally and festival until the early 1980s. Wayne State University hosted a festival in 1984, and it moved to St. Paul’s Episcopal Cathedral in 1985.

From 1986-1988, the civil rights march took place down Woodward Avenue followed by a rally at Kennedy Square. A party took place at the McGregor Center on the campus of Wayne State University following the rally, organized by a small number of dedicated gay and lesbian groups and volunteers.

In 1989, the gay and lesbian civil rights march was moved to Lansing, Mich., to attract statewide participation and political awareness as well as to celebrate the 20th anniversary of New York City’s Stonewall Riots.

Since metro Detroit was left without a LGBT march or rally and party that year, the first official Gay and Lesbian Pride Festival was founded and sponsored by the Detroit Area Gay/Lesbian Council. It began a tradition of being held on the first Sunday of June. That year the Pride Festival took place on the Dearborn Campus of the University of Michigan in the gymnasium.

In 2011, Motor City Pride relocated to Hart Plaza in Detroit and expanded the festival to two days with the parade returning to the official lineup of events.