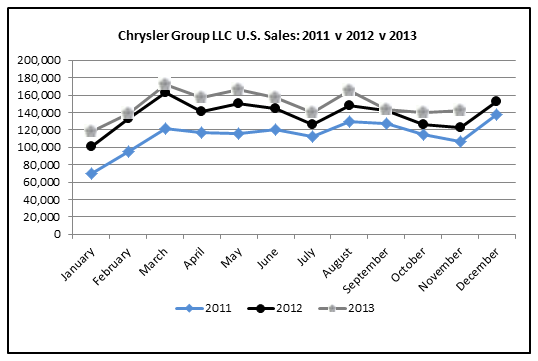 In November, Chrysler Group continued its streak of monthly sales growth, and has had 44 consecutive months of year-over-year sales increases in the U.S.

So, let’s take a deeper dive and look behind the numbers for the top seven highlights from our U.S. November sales:

5. Speaking of the new Cherokee, the newest kid on the Pentastar block helped spur Jeep brand sales to its best November ever.

7. And, finally, if you’re into plant rivalries, the men and women at the Toledo (Ohio) Assembly Complex nudged their counterparts at the Windsor (Ont.) Assembly Plant. Sales of the TAC-made Jeep Wrangler and Jeep Cherokee totaled 21,922, compared to sales of the WAP-made Chrysler T&C, Dodge Grand Caravan and Ram Cargo Van, which totaled 21,694.