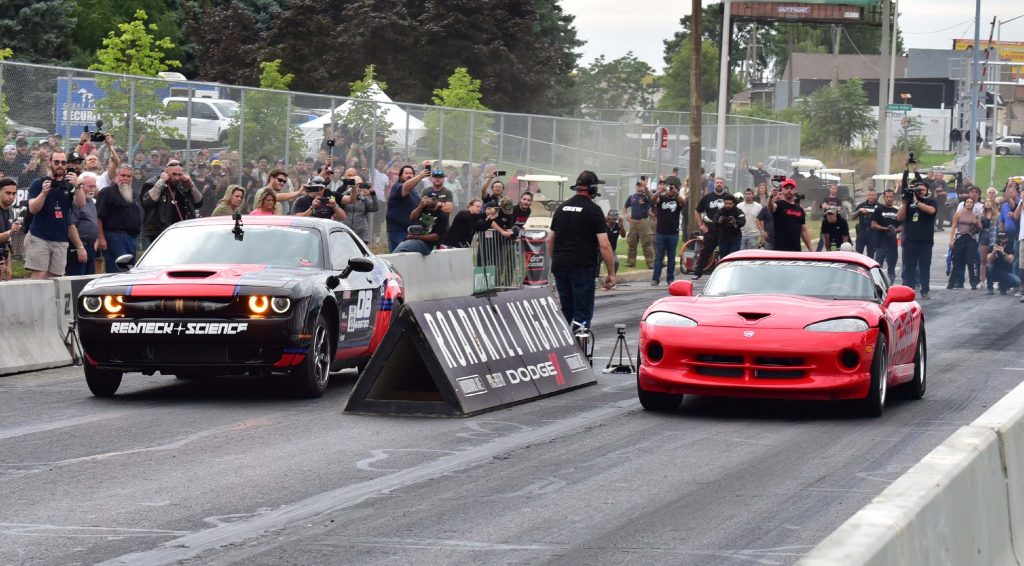 November 1, 2022 , Auburn Hills, Mich. – Dodge and MotorTrend are announcing the 2023 return of the one-day festival of street-legal drag racing, MotorTrend Presents Roadkill Nights Powered by Dodge, along with a new format for the popular Dodge Direct Connection Grudge Race that highlights the Roadkill Nights event. Grudge Race competitors will pair up in 2023 and use all-new Dodge Direct Connection HurriCrate series of engines, derived from the all-new 3.0L Hurricane Twin Turbo engine, as the foundational building blocks of their respective drag car build projects.

The 2022 edition of MotorTrend Presents Roadkill Nights Powered by Dodge, held on August 13, set a new one-day attendance record with more than 40,000 performance enthusiasts turning out in person, along with more than a million online views. The 2023 event will represent the eighth edition of Roadkill Nights, which has evolved from humble beginnings in a stadium parking lot to its current form with a massive footprint that draws tens of thousands.

“Roadkill Nights just continues to evolve and get better each year, and we knew we were going to run it back next year, so we thought, ‘Why wait?’ We’re announcing right now that our horsepower circus will be coming to town in 2023,” said Tim Kuniskis, Dodge brand chief executive officer – Stellantis. “Next year, Dodge Direct Connection Grudge Race competitors will have at the heart of their build projects new Direct Connection HurriCrate engines. Since this is new tech for our enthusiasts, we’re going to give them more time to dial in their race car builds. We can’t wait to see the results next summer during Roadkill Nights Powered by Dodge.”

The Dodge Direct Connection Grudge Race pits online automotive builders in head-to-head drag-racing competition. The 2023 Grudge Race will feature pairs of competitors working together to create a Dodge or Plymouth drag machine using a new Direct Connection HurriCrate Series engine. The HurriCrate series of engines from Direct Connection was announced today in conjunction with the opening of the Dodge brand’s exhibit at the 2022 Specialty Equipment Market Association (SEMA) show in Las Vegas, Nov. 1-4.

The 2023 Dodge Direct Connection Grudge Race will feature an experienced drag racer and online automotive builder (The Mentor) working together with a “rookie” online builder/racer lacking previous drag-racing experience (The Protégé). The Mentor will “school” The Protégé on building, tuning and testing their build project before The Protégé ultimately battles it out on the drag strip for the Direct Connection Grudge Race crown during the Roadkill Nights Powered by Dodge event. All competitors will be linked with a Dodge Power Brokers dealer and have VIP access to the Direct Connection Tech hotline at (800) 998-1110 to assist with their build projects.

“We are proud to partner with Dodge and bring back fans to Roadkill Nights in 2023,” said Eric Schwab, MotorTrend Group’s group SVP. “Roadkill Nights truly brings the thrill of fingers-clenching, top-speed drag racing to life. There’s something for everyone — drag racers, families, foodies and anyone who is looking to have a great day filled with unparalleled fun.”

Additional details on the 2023 MotorTrend Presents Roadkill Nights Powered by Dodge event, including dates, location and information on the Dodge Direct Connection Grudge Race and event competitors, will be shared later in 2023.

Roadkill Nights is an event produced by ROADKILL, a brand of MotorTrend Group, with a hit show that delivers a one-of-a-kind taste of “Automotive Chaos Theory.” For more information on Roadkill and Roadkill Nights, follow on Facebook at facebook.com/roadkillshow or on Twitter at twitter.com/roadkillshow. Fans can follow the action for Roadkill Nights with hashtags #RoadkillNights and #PoweredByDodge or watch ROADKILL across MotorTrend+, MotorTrend TV, or MotorTrend FAST TV through Samsung TV Plus and XUMO.

MotorTrend Group
MotorTrend Group, a Warner Bros. Discovery company, is the world’s largest automotive media group dedicated to introducing, inspiring and intensifying people’s passions for the motoring world. Comprised of more than 50 iconic brands including MOTORTREND, HOT ROD, ROADKILL, TOP GEAR AMERICA and more, MotorTrend Group is the ultimate source of entertainment and information for both auto enthusiasts and car shoppers, with a monthly audience of more than 26 million and over 110 million social followers. Featuring world-class automotive entertainment across the #1 television network for automotive fans, digital streaming channels, iconic events, the largest automotive social network, over seven decades of print and digital editorial content and cutting-edge resources for new-car shoppers, MotorTrend embodies every corner of car culture. From electric vehicles to timeless classic customs, MotorTrend Group brings the latest motoring trends to fans of all generations.

Dodge//SRT
For more than 100 years, the Dodge brand has carried on the spirit of brothers John and Horace Dodge. Their influence continues today as Dodge shifts into high gear with a lineup that delivers unrivaled performance in each of the segments where they compete.