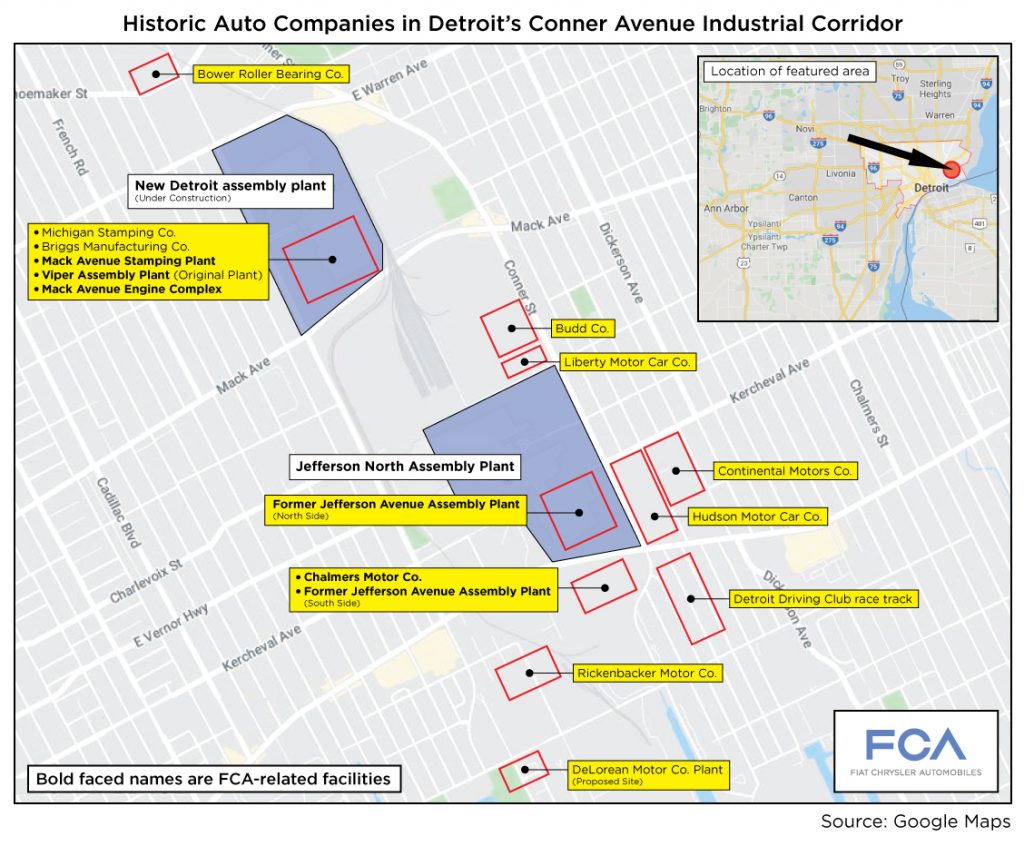 When Antoine Laumet de la Mothe, sieur de Cadillac, aka “Cadillac”, arrived by canoe in 1701 on the shores of what is now Detroit, little did he know that his decision to establish a fort and trading post along a bottleneck of the Great Lakes would become the center of the world’s automobile industry and ultimately to the new FCA assembly plant rising on the city’s eastside.

Few realize the historical automotive importance of this small area along Conner Avenue between the Detroit River and Warren Avenue. While it was not the birthplace of the automobile industry, it certainly played a more than significant role in the history of the industry and FCA. By 1920, nearly a dozen automakers, some of them electric, and suppliers had established roots and plants along this corridor, including Chalmers Motor Co., Hudson Motor Car Co., Continental Motors Co., Liberty Motor Car Co., Briggs Manufacturing Co. and Rickenbacker Motor Co.

Along with the plants came a host of notable names and characters in automotive history: Henry Ford, Walter P. Chrysler, J.L. Hudson (department store chain founder), Eddie Rickenbacker (the World War I airplane pilot hero) and, much later, John DeLorean, the former GM executive who launched the ill-fated DeLorean Motor Car Co. made infamous in the movie “Back to the Future.”

One of the most significant events in automotive history, long before there was even an “industry,” took place on a plot of land just east of Conner and south of East Jefferson. In October 1901, a young, brash upstart automaker named Henry Ford challenged the most well-known automaker and racer in America of that time, Alexander Winton, to a highly publicized car race on a former horse racing track. Ford won that race and the ensuing publicity across the nation attracted multiple investors, helping Ford launch the Henry Ford Co. and his automaking career. (Ford left that company in a dispute with the investors within a year and went on to form the Ford Motor Co.)

While there were two other horse racing tracks within a short distance of the Detroit Driving Club where Ford and Winton raced, there were a number of other key factors that played a role in the auto industry’s growth here. The area, known then as Fairview Village and part of Grosse Pointe Township, was outside the city of Detroit, had plenty of cheap, undeveloped land, rail access, as well as sewer, water and power access. The south end of the corridor was the Detroit River with shipping access to the entire Great Lakes waterway.

Among the first major factories to go up was the Chalmers Motor’s plant on East Jefferson, just west of Conner (it originally was the E.R. Thomas Motor Co. and later the Maxwell Motor Co.). It was joined by a Hudson Motor Car plant at the northeast corner of East Jefferson and Conner. (In 1954, Hudson merged with Nash-Kelvinator to form American Motors, which later added Kaiser-Jeep, before being bought by Chrysler Corporation in 1987.)

Continental Motors Co. (no relation to the Ford brand) built an engine plant, whose ruins can still be seen today, a block east of where the Hudson plant stood. The Hupp Motor Car Co. established several parts operations south of East Jefferson and west of Conner Avenue, including the Hupp-Yeates Electric Car Co., which operated from 1911-1916.

The Automobile, an early industry publication, noted in 1914 the existence of 11 car assembly and component plants in the area, including the Chalmers, Hudson and Continental plants, as well as plants for Lozier Motor Co., Bower Roller Bearing Co., Zenith Carburetor Co., and the Anderson Forge and Machine Co. There also were plants for Wadsworth Manufacturing Co., which produced car bodies, and McCord Manufacturing Co., which made car radiators.

Later, in 1916, the Liberty Motor Car Co. was established and a plant with offices that mimicked the appearance of Independence Hall in Philadelphia was built on Charlevoix Avenue just west of Conner. Liberty Motors was out of business within a couple of years and the Budd Co. (later Thyssen-Krupp Budd) bought the complex and built vehicle bodies there until about a decade ago. The site is now mostly cleared and part of the Jefferson North Assembly Plant expansion.

Among the small startup auto companies was Rickenbacker Motor Co. The World War I fighter pilot hooked up with a number of investors and launched a car company using his name. The company’s first offices were established in a building on Lycaste Street, south of East Jefferson. Production occurred in a plant on the city’s westside, but the company only lived from 1922-1927.

In 1916, the Michigan Stamping Co. began producing body parts for automakers in a plant on Mack Avenue between St. Jean Street and Conner Avenue. Walter Briggs bought the facility in 1923 and it became part of Briggs Manufacturing Co. until Chrysler Corporation bought the plant and made it the Mack Avenue Stamping plant in 1953. The plant was converted into the original Dodge Viper Assembly plant in 1992. Viper production was moved a couple of miles north to the Conner Avenue Assembly plant in 1996 and Mack Avenue Stamping plant was torn down. Two, new Mack Avenue Engine plants were constructed on the site, one opened in 1998 and the other in 2001.

Finally, we come to John DeLorean. The former General Motors Corp. executive who was credited with “fathering” the Pontiac GTO, Pontiac Firebird and Pontiac Grand Prix, left GM to launch the DeLorean Motor Co. in 1973. DeLorean initially eyed a site on St. Jean Street at Freud Street to produce the short-lived, unique, gull-wing stainless steel sports car of “Back to the Future” movie fame. DeLorean ended up producing the vehicle in Northern Ireland with help from the British government, bodies from Lotus and engines from Renault.

Today, construction crews are busy erecting steel and installing equipment to convert the two Mack Avenue Complex plants into a single, final vehicle assembly facility. Parts of St. Jean Street, north and south of Mack Avenue, are closed to enable that expansion at both the Mack Avenue Complex and soon at the Jefferson North Assembly, creating nearly 5,000 new jobs in the city.

Sometime near the end of next year, the latest “fruits” from the newest “plant,” two new Jeep® vehicles, along with their electrified models, will emerge from the more than 100-year evolution of motor vehicle production along the Conner Avenue corridor on the eastside of Detroit.