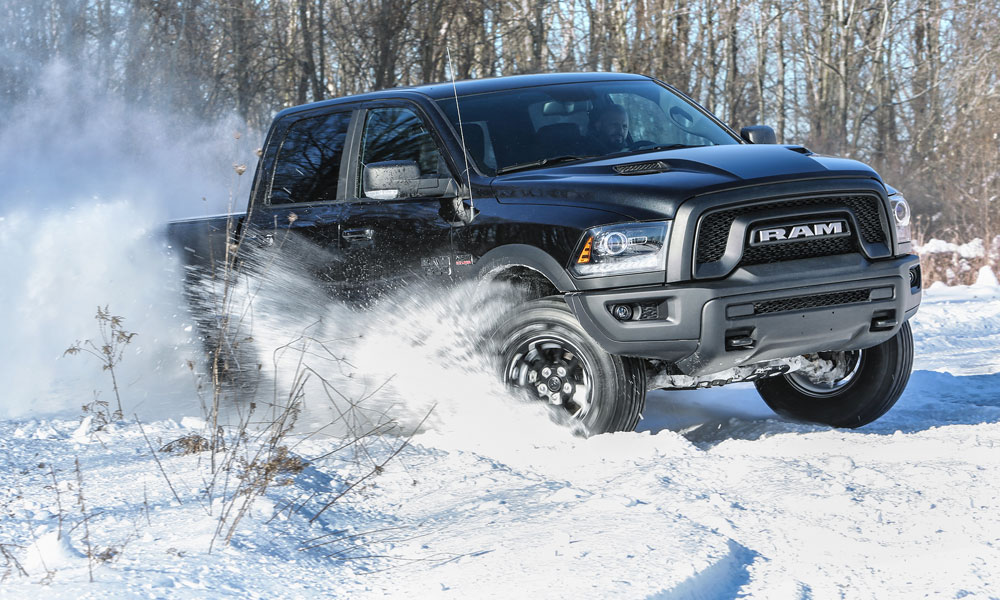 The 4x4 system in the 2018 Ram 1500 Rebel Crew Cab Black shares engine torque with the front and rear axles for some off-road fun.

For much of the northern hemisphere, it’s cold outside, which means drivers need to think more about traction.

Whether it is just a light dusting or several inches of snow (in places such as Atlanta, they’re practically the same thing), sending drive torque to all four wheels is desirable to keep things moving on streets and highways.

Many people who face these conditions yearly opt for a vehicle with either all-wheel drive (AWD) or four-wheel drive (4WD) for an extra level of capability and confidence.

We hear you asking – AWD or 4WD, aren’t they the same thing?

In general, yes. Both systems work to maximize traction by distributing torque to all four wheels. The difference is in the level of control over the torque management.

We can illustrate that difference with a closer look at the various 4×4 drive systems available on Jeep® vehicles, including some helpful videos.

One note first: No amount of enhanced traction from the drivetrain improves stopping ability on slick roads. Tailor your speed to the weather and road conditions, and increase the gap between the vehicle ahead of you. Those vehicles you see spun out on the sides of the road? They didn’t heed that advice.

Now, in general, AWD systems are always active and automatically share torque among the axles when low-traction conditions are detected, while 4WD systems are part-time and need to be engaged by the driver via a lever or button in the cockpit.

Auto-engaging systems can be found in cars, such as the Dodge Charger and Challenger, and in SUVs, such as the Jeep Renegade, Compass and Cherokee (Active Drive) and the Jeep Grand Cherokee (Quadra-Trac and Quadra-Drive). On the other hand, part-time systems are typically used on heavy-duty and truck-based vehicles, such as the Jeep Wrangler and Ram 1500 (a full-time 4WD system is an option on the Ram 1500).

At other times, the AWD system sends torque to only one axle and disconnects the other axle drive components to reduce drag on the drivetrain. Check out this video explaining Active Drive II on the Jeep Cherokee:

There are drivers who don’t always need the full impact of a 4WD system and want to control when it is engaged, based on the road and driving conditions. Those systems are featured on vehicles such as the Jeep Wrangler (Command-Trac and Rock-Trac) and the Ram 1500 pickup. With a part-time 4WD system, the drive torque is typically split 50/50 between the front and rear axles. Locking differentials in the axles can help direct torque to wheels with more traction.

Here is a video that explains the details on Rock-Trac:

Regardless of which system you choose – AWD or 4WD – making maximum use of the traction available enables your vehicle to get you where you need to be with a minimum of drama.