UPDATE: We’re very sad to report Mr. Hubert (Hubie) Fields passed away on Sunday, July 27.  “His mission was done on this earth and he has returned to heaven to give his ‘full report’,” his grandson, Kirk Bierley told us. I was thrilled, when in May, Bierley called to let me know his grandfather “is still around!”.That was seven years after we first met him on the occasion of his 100th birthday in 2006. 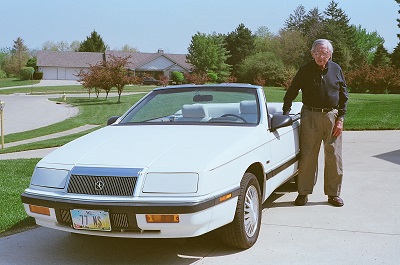 Below is both the story we posted in May and the original video we shot with Mr. Fields. The entire Chrysler family extends its condolences to Mr. Fields’s family and friends. Our lives are better for having crossed paths with this wonderful gentleman.
The last time I ran into Hubert Fields, he almost ran into me. It was Dec. 4, 2006, and to celebrate his 100th birthday that day, some of our folks ran him around really fast in a Dodge Viper. It’s what the lifelong devotee of Chrysler, and former employee, really wanted.
A few weeks ago, his grandson, Kirk Bierley, sent me an email with the ominous word “update” in the subject line. He asked me if I remembered his grandfather, which I did. I was afraid to go further until I scanned ahead and was relieved to read, “He’s still around! He’s 107!”  A bit slower than he was seven years ago, but no less the lover of Chrysler vehicles. That photo above is him a few weeks ago standing next to Mr. Bierley’s dad’s 1991 Chrysler LeBaron. Still in great condition, the car has only about 37,000 miles on it. Mr. Fields has a lot more mileage on him than the LeBaron and he’s seven years older than the Dodge brand, but just like Dodge, he’s held up to the test of time. Some history.*Hubert Fields was born Dec. 4, 1906, in Darke County, Ohio, not too far from Richmond, Ind.*Always fascinated by cars, in 1926 he started working at the Chrysler Parts Center on Leo Street
in Dayton, Ohio. He worked in the parts and service department, which warehoused parts produced in the factories of Detroit. While working for Chrysler in Dayton, he lived at the YMCA and sent money home to his family. He truly enjoyed his formative, but limited, years at Chrysler.*Chrysler vehicles owned: 1928 Dodge Coupe (Dark green with yellow wheels) 1930 Plymouth Sedan 1940’s-1960’s He owned two Plymouths and three Desotos. All were 4 door sedans 1970 Plymouth Newport w/Hemi 1974 Plymouth Newport 1978 Dodge Diplomat 1981 Chrysler K-Car 1982 Chrysler Le Baron 1984 Chrysler New Yorker 1988 Dodge Shelby Daytona Turbo 1990 Chrysler New Yorker 1991 Chrysler New Yorker Fifth Avenue (current vehicle)
He also owned a couple of Dodge pickup trucks when he worked on the farm. Here’s the original video we did with Mr. Fields when he visited us in 2006 on his 100th birthday.
Product Passion