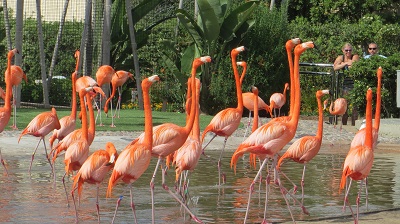 Spring is one of our favorite seasons. The weather gets a little warmer, the sun sets a little later, and the flowers start to bloom.

For Brittany and myself, it’s the perfect time of the year to enjoy our Jeep® Wrangler with the tops off! We make a playlist with our favorite music, put on the sun block, throw on our hats, and we’re off on a quick weekend adventure.

This time, our trusty atlas took us to the beautiful city of San Diego. As we headed closer to the city limits, we realized that SeaWorld is celebrating its 50 Year Anniversary Celebration!

We parked our Wrangler and headed straight to the party! When we entered the park, we stumbled upon the Explorer’s Reef where we had the opportunity to touch bamboo sharks, horseshoe crabs, sting rays, and the neat little cleaner fish (that people have been known to use for pedicures).

After watching Blue Horizons, an interactive dolphin and bird show we trekked over to the Sea Lion and Otter Stadium where we saw sea lions Clyde and Seamore perform a humorous spin on pop culture. Brittany and I are so amazed that the magnificent creatures have been trained like pets! If only our eight-pound Chihuahua Zorro could fetch the newspaper, catch a basketball, and do the limbo!

Before we headed to the Turtle Reef, we followed a gossiping parade of beautiful pink flamingos (below) to the Shark Encounter (right). We got to see one of the world’s largest displays of sharks while we walked through a submerged viewing experience. It is simply incredible to see these beautiful animals up close and personal! Especially those rows of teeth, from a distance!

One of my favorite parts of the day was the Penguin Encounter. These Antarctic penguins always look like they are having the best time jumping in and out of the water. Perhaps we need to make a trek to Antarctica to hang out with these guys!

Before leaving the park, we met a few SeaWorld alumni that were at the park to celebrate the kick-off of the 50th anniversary. To end our exciting adventure under the sea, fireworks sparkled across the sky as we jumped back in our Wrangler. What a perfect ending to a wonderful voyage!