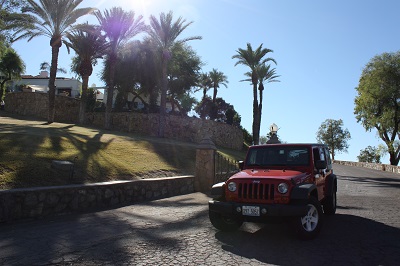 The fall is our favorite time of the year. The spooky harvest moon makes its’ presence known, days become much shorter, and temperatures drastically dive in the Valley of the Sun. Just when the rest of the country has to bust out its hard top, we are finally able to take the top off our Wrangler!

As we’ve dedicated the past year to discovering the history of iconic American Legends in our Jeep Wrangler, Brittany and I love visiting historic buildings that tell a story… this time of the year some buildings whisper louder than others.

This past week, we jumped in the Wrangler and visited The Wrigley Mansion. Located in sunny Arizona, The Mansion was The Wrigley family’s “winter cottage.” It was a 50th wedding anniversary gift from the chewing gum magnate William Wrigley Jr. to his wife Ada. Built between 1929-1931, the Wrigley Mansion is a beautiful property in Phoenix that sits above the historic Biltmore Hotel. The Wrigley Mansion is open to the public for tours, happy hour, restaurant dining, special events, weddings, and our of course our favorite, Sunday Brunch!

At brunch, and in the spirit of Halloween, we were able to unearth a few “ghost stories” from the magnificent staff members, who appeared to have spoken for the wall. Our waiter Ryan, said that he had heard that a spoon was once thrown at his fellow co-worker when no one else was in the room.

We also met Zach, (A familiar character on our adventures. Like Zach from The Rubicon Trail.) one of the Wrigley Mansion’s valets. He told us that Mr. Wrigley had a heart attack upstairs in 1932, just one year after completion of the mansion. One evening when he was locking up he said that he heard someone say, “How are you?”

Our tour guide Amy, has heard the phones ring over and over again, but has never felt any spirits during her time at The Mansion. She mentioned that is an honor to work at one of the hidden gems in the Valley. As we walked into the living room, she turned on the oak Steinway recorder player piano for us. The piano (right) has been reported as one of the only two in the world. The other one is at the Smithsonian. She played Gershwin’s very own recording of “Rhapsody in Blue.”

As Brittany and I walked among the property grounds, we imagined what Arizona was like in the 1930s. We left The Wrigley Mansion inspired…to hunt for lingering spirits in historic places that were once graced with American Legends.

As you are driving your Jeep this fall, take the road less traveled! A new adventure and an American Legend, (possibly named Zach) is always waiting and the walls may begin to rumble!

We’ll see you out there!