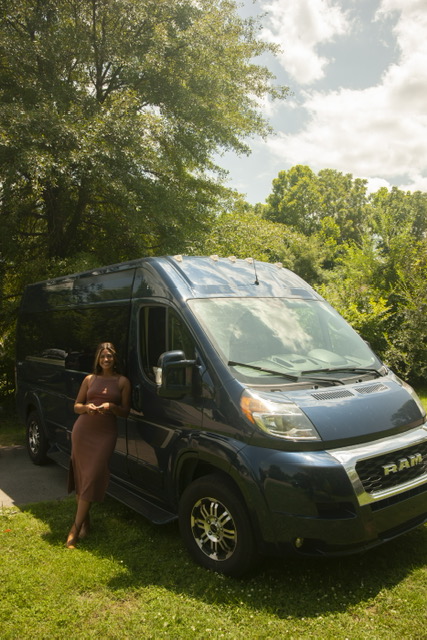 The Ram BandVan program has seen a variety of up-and-coming artists get behind the wheel this year. From solo artists to trios playing a variety of musical genres, from country to jazz and soul fusion, the Ram BandVan has given these artists an opportunity to tour in comfort and style. Recently, breakthrough singer-songwriter Madeline Edwards spent time touring with the ProMaster BandVan.

Edwards, who grew up in Texas, has found ways to cross musical boundaries and marry genres, like soul, country and jazz, together to create her unique sound.

Over the past year, Edwards made her national television performance debut by singing at the 2021 CMA Awards, and also received several music industry accolades, including being named “Hot Country Spotify Artist to Watch 2022” and an “Apple Music Country Riser.”

This summer she was able to tour and perform with one of her musical heroes Chris Stapleton on the All American Road Show Tour.

Edwards’ music has become increasingly popular, racking up millions of streams across music platforms. She recently signed with Warner Music Nashville, and her debut album, “Crashlanded,” will arrive November 4. “Crashlanded” features hits, such as “The Wolves,” that showcase her story and journey up to this moment in her career, while paying homage to her musical influences along the way. “I’m very excited for everyone to hear the stories, the musical influences, the time and the experience that has brought me to this moment. ‘Crashlanded’ feels like my child,” said Edwards.

Edwards has enjoyed her time touring in the Ram BandVan. The ProMaster van has given her an opportunity to experience touring differently than she has in the past. “It’s really cool touring with the BandVan because I’m able to bring out family and friends who wouldn’t necessarily be able to come out on the road with me,” she said.