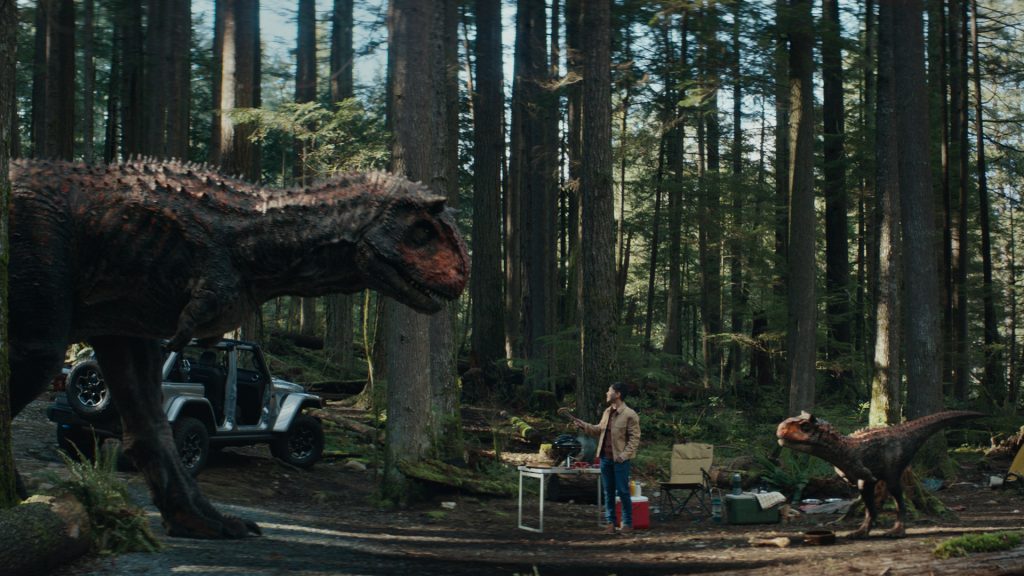 The latest commercial from the Jeep® brand was a long time coming, but doesn’t go as far back in time as two of the stars of the ad.

The brand and Universal Pictures teamed up to launch a global marketing campaign to celebrate the arrival of “Jurassic World Dominion,” the epic conclusion to the Jurassic era, to theaters.

In the one-minute commercial that kicked off the campaign, a Jeep Wrangler 4xe owner finds a newly hatched Carnotaurus in his own yard and decides to faithfully care for it by taking the dinosaur on off-road adventures, daily walks along the sidewalk in his neighborhood and a camping adventure before running into its mother.

To make the ads look as if they were part of the movie, the brand worked with the studio and Industrial Light and Magic to work from scratch to create the dinosaurs for the spot.

“When the opportunity came to bring (a Carnotaurus) to life we wanted to jump on it. We loved the idea of telling the story of a Carnotaurus junior,” said Graeme Puttock, visual effects producer at ILM. “Making a new dinosaur like this from scratch takes a while, maybe not millions of years like the real ones do, but certainly a while.”

Work began on the commercial, and the dinosaurs, nearly two years ago as production was underway on “Jurassic World Dominion” and even before the final script for the spot was completed.

Creating a Carnotaurus was a challenge for ILM as only one complete skeleton fossil has been found to date, and it was an adult.

“We had to reference other carnivores and take some creative license,” Puttock said. “We know we needed the baby to look recognizably like a Carnotaurus, but it also had to be cute.”

Initially the ILM digitally sculpted a 3D model to the size of a human hand and posed it in a way where it resembled a hatchling, emphasizing its hands and feet and posed in a way like it just came out of the shell with its feet up by its nose.

“We knew we were on to something when we saw the reactions (from the creative teams and others),” he said. “Everyone loved the baby.”

After creating the baby, details such as texture to the skin, claws, teeth, eyes and tongue were added to the model for the adolescent version of the dinosaur. This effort, along with working with photography, lighting and composition, made the “creatures look alive.”

This attention to detail can be seen later in the commercial when the dino twitches, and has grass encrusted claws, as it sleeps in the back of the Wrangler with spittle flying from its mouth.

“Each and every visual effects shot goes through the hands of many, many talented artists and valued support teams from digital cameras to animation, lighting and creature effects where we digitally simulate the look of flesh, muscles sliding under the skin and the jiggling of body mass as dinosaurs move to bring it all seamlessly together,” he said. “It’s this level of detail that brings these creatures to life and sells the shot.”