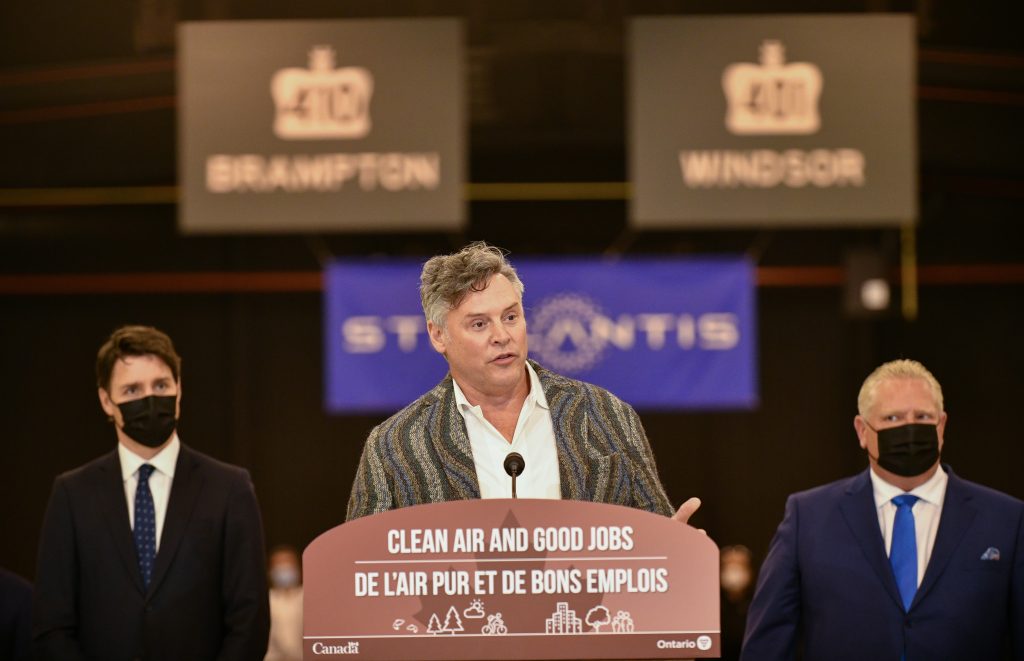 Stellantis today announced plans to invest $3.6 billion CAD ($2.8 billion USD) to secure the future of its Windsor and Brampton (Ontario) Assembly Plants and to expand its Automotive Research and Development Centre (ARDC) to accelerate the company’s move to a sustainable future. This announcement also supports the company’s Dare Forward 2030 strategic plan and its long-term electrification strategy to invest $45 billion CAD ($35 billion USD) through 2025 in electrification and software globally.

Stellantis North America Chief Operating Officer Mark Stewart, alongside Prime Minister Justin Trudeau, made the announcement during an event at the ARDC, which was also attended by Ontario Premier Doug Ford; Minister of Innovation, Science and Industry François-Philippe Champagne; Ontario Minister of Economic Development Vic Fedeli; and Unifor Assistant to the National President Shane Wark, as well as other elected officials and community leaders.

“These investments reaffirm our long-term commitment to Canada and represent an important step as we move toward zero-emission vehicles that deliver on our customers’ desire for innovative, clean, safe and affordable mobility,” said Stewart. “We’re grateful to both the federal and provincial governments for their shared vision to create a sustainable future. And, to Unifor and our workforce for their support in helping ensure the viability of our Canadian operations for the long-term.”

Today’s announcement increases the company’s overall investment in Ontario to $8.6 billion CAD when combined with the Stellantis-LG Energy Solution joint venture battery plant, which will create 2,500 new jobs in the province. It also doubles the investment commitment of $1.5 billion CAD made during the 2020 contract talks.

“Today’s deal on made-in-Canada electric vehicles is yet another investment in our workers and in our future,” said Prime Minister Trudeau. “We’re building a world-class Canadian auto industry, an innovative economy and a clean, strong future for everyone. This is what a healthy environment and a healthy economy looks like.”

“Today is yet another example that our plan to build Ontario is delivering huge wins for workers and communities all over this province,” said Ontario Premier Doug Ford. “Ontario has everything it needs to be North America’s auto manufacturing powerhouse once again. Where other governments stood by and watched jobs flee this province, we are getting it done and ensuring that cars of the future are made in Ontario by Ontario workers.”

Facility Investments
The Windsor Assembly Plant will be transformed to support production of a new multi-energy vehicle (MEV) architecture that will provide battery-electric (BEV) capability for multiple models. The plant will have maximum flexibility to adjust production volumes as needed to meet changing market demand over the next decade. Retooling is expected to begin in 2023.

The Brampton Assembly Plant will be retooled and fully modernized, beginning in 2024. When production resumes in 2025, the plant will introduce an all-new, flexible architecture to support the company’s electrification plans.

With this announcement, both Ontario assembly plants are expected to return to three shift operations in order to support the demand for these new products. The company will announce product allocation at a later date.

The Windsor-based ARDC will expand its talent pool by adding more than 650 highly skilled engineering jobs in various areas to support Stellantis’ growth in electrification. It will expand North American capability related to the transition to EV with a focus on core technology areas: electrified propulsion systems, including batteries, power electronics, electric machines, motor controls, energy management and embedded software.

The ARDC also will become the first battery lab in North America, following the company’s announcement to establish a similar centre in Turin, Italy. The Battery Lab will be a state-of-the-art technology centre for the development and validation of advanced BEV, PHEV and HEV cells, modules and battery packs. This in-house capability will rapidly accelerate Stellantis’ EV best-in-class performance. The new 100,000-square-foot facility will be added to the existing building with completion expected by the end of 2023.

In March, Stellantis and LG Energy Solution announced the formation of a joint venture company to establish the first large-scale, domestic, electric-vehicle battery manufacturing facility in Windsor to support the company’s electric battery development. With an investment of $5 billion CAD ($4.1 billion USD) and the creation of an estimated 2,500 new jobs, the joint venture company will produce leading edge lithium-ion battery cells and modules to meet a significant portion of Stellantis’ vehicle production requirements in North America.