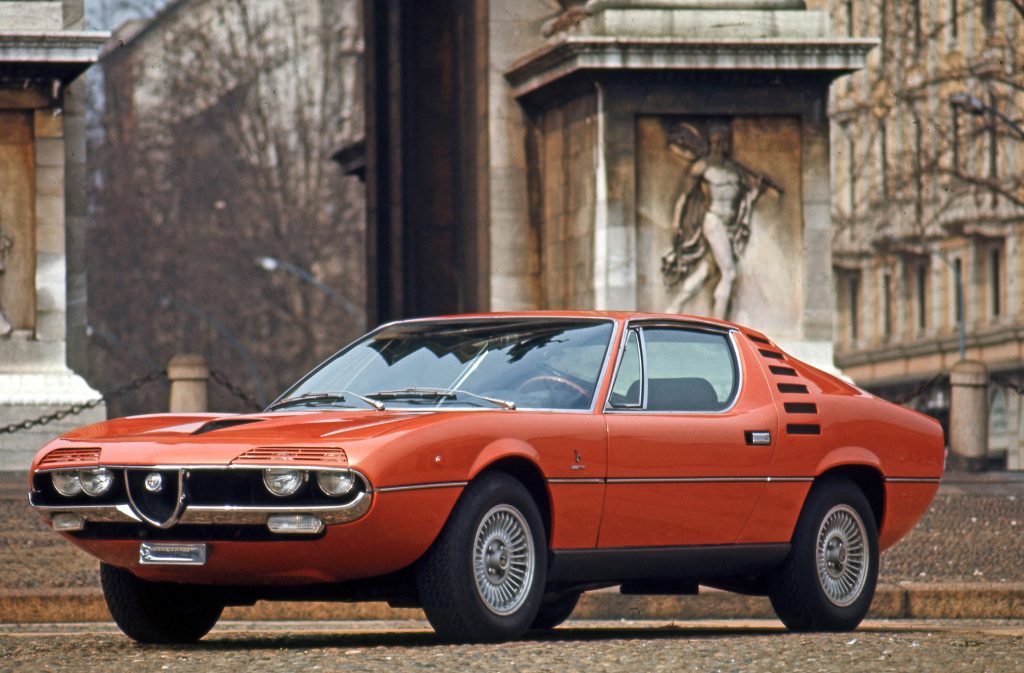 To celebrate the 50th anniversary of the 1970 Alfa Romeo Montreal, Klaus Busse, head of design – Alfa Romeo, and Ralph Gilles, head of design – FCA, invited fans from around the world to reimagine a modern version of Alfa’s iconic 1970 GT car. Welcome to the Montreal Design Challenge.

The Montreal was originally unveiled as a concept at the 1967 Montreal Expo in Canada — hence its name — debuting in production form in 1970 and produced through 1977. While the concept was a traditional Italian berlinetta, or sports coupe, with an inline-4 under the hood, the production Montreal gained four cylinders, as well as a more athletic body style. Thus, as Challengers, Mustangs, Camaros and Javelins were cruising boulevards and dominating race tracks stateside, the Montreal was representing Italy’s sculpted interpretation of muscle cars.

Designed by Marcello Gandini of Bertone, who also penned the Lamborghini Miura and Countach, the Montreal boasted a full muscle-car menu: front-engine, rear-drive layout with V-8 power and live rear axle, along with the  hallmark long hood and fastback body style. But it was still an Italian exotic. Brakes were disc all around, the front suspension was a double-wishbone setup and power came from a 33 Stradale-derived 2.6-liter 200-horsepower V-8 with aluminum block and heads and a dry-sump oil system, paired with a ZF five-speed manual and a limited-slip differential.

Via his Instagram account, Busse opened the Montreal Design Challenge and received more than 500 entrants, who submitted their sketches via direct message or by tagging him and using the hashtag #MontrealDesignChallenge. Busse, along with Gilles, both proud “alfisti,” posted their top three favorites on June 24, 2020, the date of another important anniversary — the official 110th birthday of Alfa Romeo.

Taking top prize in the @alfaromeoofficial #montrealdesignchallenge was the standout design from @a_u_t_o_s_k_e_t_c_h . Per Busse, “No unnecessary or distracting details. Just pure and beautiful surfacing.” Gilles added, “So voluptuous yet so clean.”

Second place went to @rupertodesign, whose green-hued sketch Busse deemed, “Unmistakable Montreal and a favorite of the Instagram community!”

Rounding out the podium and finishing in third place was the “sleek interpretation,” per Busse, from @maxbenon.

Busse fittingly summed up the successful Montreal Design Challenge: “A big thank you for the 500+ submissions we received during the competition! We had a blast going through all of them. What impressed me most was the sheer variety, but all united by the passion for this amazing brand. Happy 110th birthday, Alfa Romeo! And happy 50th anniversary, Montreal!”

The Original: Still an Icon, Always an Inspiration

When the 1970 Montreal was officially born, Alfa Romeo was already 60 years old. “By the time most other automakers are getting started, Alfa is on the fourth chapter of its story,” Lorenzo Ardizio, curator of the Alfa Romeo Museum in Arese, Italy, likes to say. Residing somewhere around chapter seven of Alfa’s unparalleled history, the Montreal remains a global design icon to this day, despite never being sold in the U.S. and modest total sales of around 3,900 units.

What makes the Montreal so memorable? According to Gilles, “The production version was faithful to the eye-catching concept, with its semi-concealed headlamps. The designers used those distinctive B-pillar slots to celebrate some of the mid-engine magic that was becoming the rage in Italian design at the time. But as a feat of packaging, the car actually manages to carry a sizable V-8 under the front bonnet. It has become a designer’s favorite. If not the prettiest of Alfas, it is certainly one of the most memorable.”

Busse admires the Montreal for its singular features and unique representation of the era. “To get a slim, supercar worthy look of the headlights, Gandini designed them partially covered with eyebrows that would fold underneath the lights when switched on. Probably the single coolest design feature of the car,” Busse said. “The second main feature of the front is more debatable: the air intake on the hood. Debatable because it’s actually not functioning, but placed there to break up the volume of the power bulge that covers the 2.6L V-8.

“I always sketch cars to better understand them,” Busse added. “When you do that with the Montreal, you quickly understand its clear construction: the horizontal chrome band that gives it stability, the top of the fender running into the side window creating a distinct element and, of course, the ventilation slots. They might be more than what was needed, but you need to remember that at that time Gandini was also designing a lot of mid-engine cars that had their cooling intakes in that position. Note also that while the front wheel arch is round, the rear is trapezoidal, aligning with the chrome band and the muscle above it. Overall, well balanced and clear, yet full of character!”