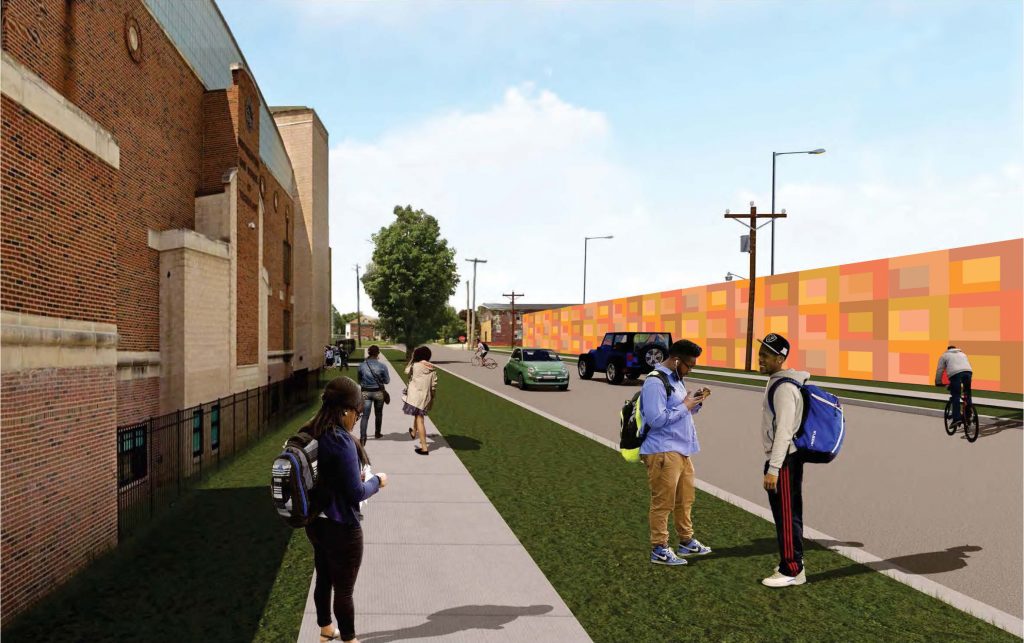 Together with Detroit’s Office of Arts, Culture and Entrepreneurship and City Walls Detroit’s murals program, we launched a heart-filled initiative on Valentine’s Day that takes Frost’s words to a new level with the announcement of a massive mural project on the city’s east side.

We have been working with City Walls Detroit, a nonprofit arts organization, to identify potential locations, ultimately identifying sections of the soundwall (along Beniteau Street) surrounding our new assembly plant. When completed in October 2020, the murals will comprise the largest municipal art installations in the region at up to 15 feet high by 1,500 feet long. However, the murals won’t be paintings of our products or corporate logos.

In an effort to ensure that the mural reflects the culture and identity of Detroit’s east side neighborhoods, we are engaging local residents, especially students, to create the mural’s design. There also is a global open call for an individual artist or a team of artists to submit their proposed creations.

FCA Mural Project Artists Open Call: Artists interested in participating in the mural project should visit the City Walls website for details about the application and selection process. An artist award of $15,000 will be paid for each of the six smaller murals on the North Wall and $50,000 for the South Walll, which is located across from the new stormwater park at located at Beniteau Street and Kercheval Avenue.

Submissions are due by March 31, 2020. The selection committee will choose an artist or team by June 1.

“Our commitment to this city goes well beyond our facility,” Mark Stewart, Chief Operating Officer of FCA-North America, said. “We (FCA, the city of Detroit and residents) have a shared responsibility for the neighborhood around the new plant. These murals will reflect the values and identity of the community and our shared vision for a positive future.”

The mural project is part of the Community Benefits Agreement between FCA and the city of Detroit, a partnership that provides more than $35 million in support for neighborhood improvements, housing, workforce development, education and training programs, and environmental initiatives.

“This wonderful gift from FCA is just another example of how much arts and culture are alive and well and thriving here,” Rochelle Riley, the city’s director of arts and culture, said. “And even more great things are coming in Detroit, where the arts are a way of life.”

We announced in February 2019 that we would invest $2.5 billion to build a new assembly plant on the city’s east side and retool the Jefferson North Assembly plant. The investment will expand the FCA production footprint, enabling the company to build the next-generation Jeep® Grand Cherokee, Dodge Durango, two all-new Jeep branded vehicles and their electrified models. The investment will bring nearly 5,000 new jobs to the city.