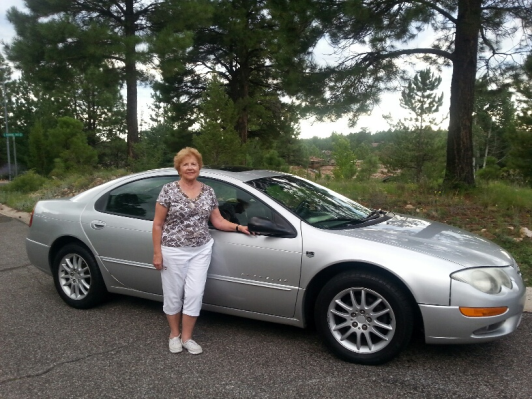 Irene Loschetter, who with her husband, Richard, were the first owners of the 2000 Chrysler 300M.

Editor’s Note: In the Pentastar family, nearly every car or truck has its own unique story. Below is one we received via the Submit Your Story at Chrysler On Demand. We hope you’ll enjoy it as much as we do.If you and your ride have a story to tell, let us know. 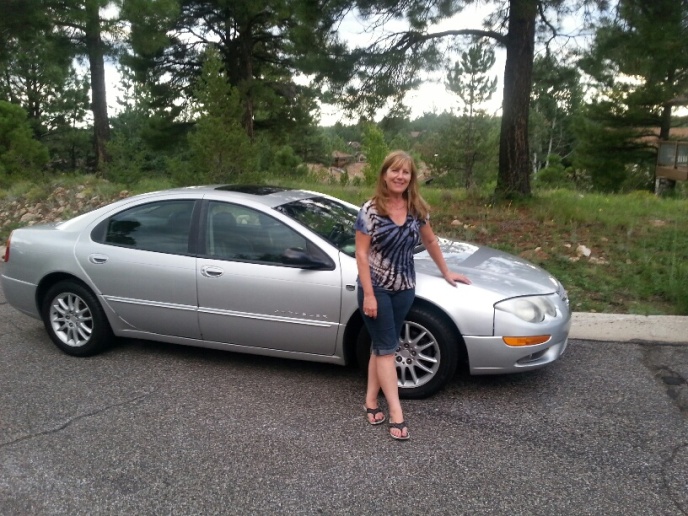 Peggy Lynch Willoby, who was the third owner of the family’s Chrysler 300M.

Irene Loschetter – Punta Gorda, Fla. Our 2000 Chrysler 300M was first seen in the show room in South Bend, Ind., by my husband Richard Loschetter and I. We bought it on the spot – just because of the look of it – sleek and beautiful. Soon after retiring to Florida we bought a second one, a 2005 Chrysler 300M. Different color, different year, but the same style. That one was for me alone.

When Richard passed away, I was left with two Chrysler 300Ms, so in 2009 I gave the 2000 300M to my son Patrick. It had about 68,000 miles on it then and the only problem we ever had was the air conditioner repaired. That car was a gem. What a ride and what a pick up! We really enjoyed showing off in it.

Patrick Lynch – Chicago, Ill. I picked up the car from my mother in Florida, drove it to Chicago and continued to drive it for 2.5 years. With its great pickup and maneuverability. I named it Scooter. I replaced the tires at 100,000 and changed the battery.

In the fall of 2011, I drove Scooter to Las Vegas for a family gathering where I transferred ownership to my sister Peggy. 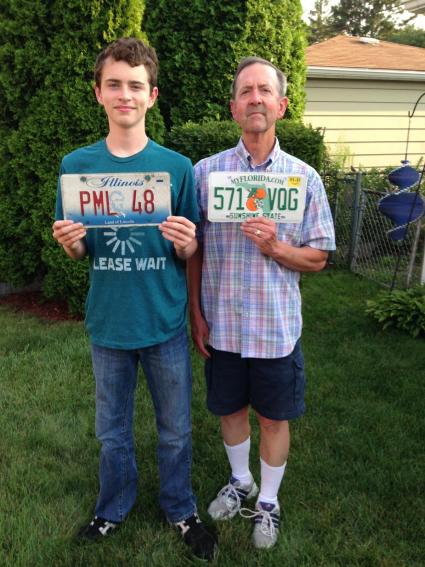 Joe and his dad, Patrick Lynch, holding the original Florida (right) license plate, and the one Patrick used after he received the car from his mom, Irene.

Peggy Lynch Willoby – Scottsdale, Ariz. After 15 years of company cars and the corporate world, I left my job. Timing was perfect in that I needed a car and my brother Patrick was willing to give Scooter to me. We met in Las Vegas in October of 2011 and my husband and I drove it home to Scottsdale, Ariz.

I drove Scooter until December of 2013 and only had to replace the tires and the battery and it now has 157,000 miles on it. What a wonderful car, always reliable, sunroof still works, music system is still awesome and it still has the same pickup as it did when it was new. It is the best road trip car ever!!

Fourteen years later and the only funny age signs are a side mirror that is taped with duck tape, a crack in the dashboard, a funny noise from the back door when you lock or unlock it and a stuck CD that we can’t seem to get out.

It is now sitting in the garage in Flagstaff, Ariz., to keep it from the heat while it is waiting for its new owner, my nephew Joe Lynch (Patrick’s son) to turn 16 in May 2015. While Scooter is waiting, we will drive it a little here and there just to make sure it stays healthy and is ready for Joe. This car is truly a member of our family and I will be sad when it leaves Arizona, but happy knowing that Joe will be safe and will have fun with Scooter.

Joe Lynch – Chicago, Ill. Now, Scooter, after all these years, will be passed on yet again to me, Patrick’s son Joe, on my 16th birthday. Despite its problems that came with age, as all things do, it still runs very, very well. I promise I will take care of it as soon as it arrives here in Chicago for the second time.

Personally, I can’t wait to finally be able to sit down and have Scooter roar to life under my feet. It’s going to be a great moment for everyone.