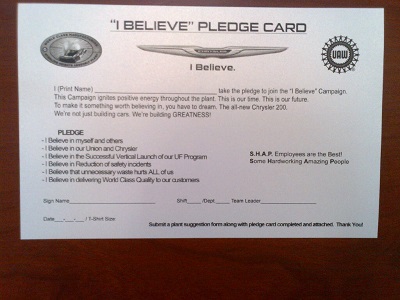 The faithful were out in force today at Sterling Heights Assembly Plant, also known as SHAP.

In 2009, the suburban Detroit site was scheduled to close its doors, a tired remnant of a bankrupt regime. But with the birth of Chrysler Group, the plant was rejuvenated.

Today it is home to the all-new 2015 Chrysler 200 – and 2,800 employees who took the extraordinary step of declaring, during a spirited production-launch celebration, their allegiance to the Company and to each other.

The “I Believe” pledge is the culmination of some soul-searching by forklift driver Rickey Lawrence and door-line workers Alexander Hopkins and Derrick Jones.

One day, while admiring the elegant 200 – code-named “UF” – Lawrence was moved to consider ways to tell the world about the breakthrough mid-size sedan. Shortly thereafter, he bumped into Hopkins.

A songwriter on the side, Hopkins urged Lawrence to listen to a new track he’d recorded. It was called, “I Believe” and its hopeful theme echoed Lawrence’s desire to boost the fortunes of his plant and his co-workers.

From the song (and some creative input delivered by Jones) came the “I Believe” campaign. Supported by Chrysler Group and the United Auto Workers union, the campaign seeks to inspire with T-shirts and signs.

Building cars “is all about teamwork,” Lawrence said. And there is no more meaningful way to affirm faith in oneself and one’s colleagues than by reciting a pledge.

And so he led the throng in reciting the following:

I believe in myself and others

I believe in our Union and Chrysler

I believe in the successful vertical launch of our UF program

I believe in reduction of safety incidents

I believe that unnecessary waste hurts ALL of us

I believe in delivering world-class quality to our customers