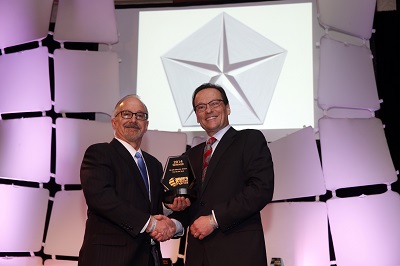 Designers get lots of glory. All of it well-deserved, considering the emotions they evoke with sleek offerings such as the all-new 2015 Chrysler 200, unveiled this week at the 25th annual North American International Auto Show in Detroit.

The competition marked its 20th anniversary this week with an awards ceremony where Chrysler Group claimed two trophies. One went to the potent 3.0-liter EcoDiesel V-6 that powers the 2014 Jeep Grand Cherokee midsize SUV to a best-in-class 730+ miles of driving range.

And when test results are official, the new turbodiesel will provide the 2014 Ram 1500 pickup with a best-in-class highway fuel-economy rating — an achievement held by the 2013 Ram 1500 equipped with Chrysler Group’s 3.6-liter Pentastar V-6, one of Ward’s 10 Best for three consecutive years.

The 500e’s electric-drive system also was the lone “engine” to garner a speeding ticket. It went to a WardAuto judge, who will go nameless here. But he has a confident grin and firm handshake.