Dodge
2016 in the rearview mirror: Dodge rocked this year; hang on tight in 2017 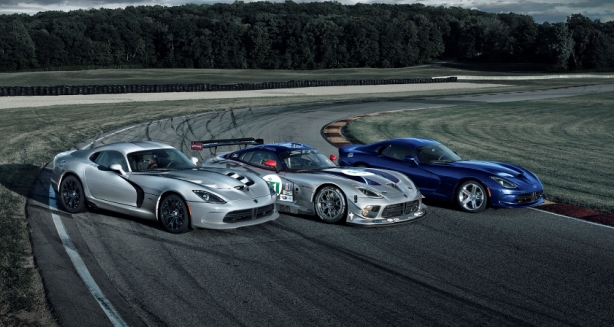 The SRT Viper GTS-R race car has made its mark on race tracks this year, capturing an American Le Mans Series class win at Wisconsin’s Road America and rejoining the competition at the 24 Hours of Le Mans.
The race track-bred SRT Viper is making its mark on streets and highways. Buyers began receiving the redesigned, 640-hp sports car earlier this year. The eye-catching two-seater receives a couple of updates for the 2014 model.
First, SRT Viper race fans can wear the GTS-R’s colors on the street. Billet Silver, the primary color worn by the Viper GTS-R, joins the standard color palette. The dark blue accent color from the No. 91 ALMS race car joins the options list as GTS-R Blue. It replaces Shadow Blue Pearl. Also, Viper buyers who select the Anodized Carbon Special Edition package for the SRT Viper GTS will get a matte black paint finish.
SRT engineers also developed a new calibration for the SRT Viper’s stability and traction control systems, providing the driver the option of more handling assist in conditions such as wet roads or cool temperatures.
The SRT Viper’s traction and stability controls are set up to give the driver plenty of leeway for using the 8.4-liter V-10’s 640 hp and 600 pounds-feet of torque to attack the road before the systems intervene.
But there are times when more aggressive intervention is desired or warranted. Those include when driving on wet roads or cold pavement, which has an impact on the rubber compound on the SRT Viper’s Pirelli P Zero tires, says Erich Heuschele, manager of SRT Vehicle Dynamics.
The new setting is named Rain Mode, but Heuschele says the calibration was tuned on dry roads, as well as wet roads. It can also be useful for a driver new to the SRT Viper who’s getting used to the car.
Drivers of the 2014 SRT Viper can toggle the stability system between On, Rain Mode and Off settings. On the 2014 SRT Viper GTS and TA Special Edition, which are equipped with the Bilstein DampTronic Select adjustable dampers, drivers can toggle between On, Rain Mode, Sport, Track and Off settings.
The 2014 SRT Viper is available to order now from SRT Performance dealers.
Viper