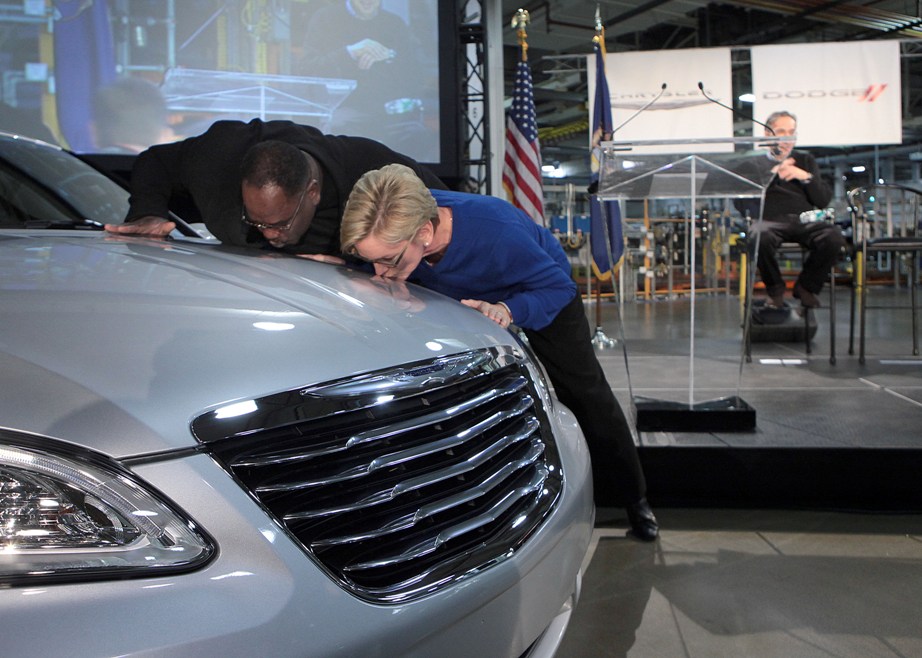 Sterling Heights Mayor Richard Notte cracks up the audience — including Chrysler CEO Sergio Marchionne and Michigan Governor Jennifer Granholm — during some of his comments Monday at SHAP.

Sterling Heights Assembly Plant (also known as SHAP) “is a Lazarus plant risen from the dead, and will rise and survive,” said Michigan Governor Jennifer Granholm during the celebration. Chrysler Group CEO Sergio Marchionne joined Granholm, SHAP Plant Manager Tyree Minner, Vice President/Director (UAW Chrysler Department) General Holiefield and Sterling Heights Mayor Richard Notte before a standing-room-only of plant employees, government officials and media. Marchionne expressed gratitude to Granholm for her “steadfast support for Chrysler” and said the event is “another important step in Chrysler’s history.” During his comments, Marchionne talked about the impact SHAP has on the community — generating $24 million in annual taxes, operations that supports 254 Michigan-based suppliers, and all the local restaurants and other small businesses that the 1,270 current employees and 900 future employees do and will support.

It was SRO, with SHAP personnel in full force Monday afternoon during the celebration of the addition of a second shift in 2011 and Chrysler Group’s $850 million investment.

Kimberly Hubbard, a team leader for the Body and White Department has worked at SHAP since 1994.   When asked about the investment and new life for SHAP, Hubbard said, “I feel really good. I feel confident now that I know I can retire from Sterling Heights Assembly Plant.”   Marchionne and all the speakers praised the partnership between the company and UAW that played a major role in keeping SHAP open. Granholm thanked the UAW for “bending over backwards” for developing a competitive workforce and contract.

Holiefield encouraged the current SHAP employees to take the new employees coming into the plant next year “under your wing and show them how to do it. Ensure that every product coming out of here resembles you. The finest workforce money can pay for.” While there was much talk of the plant’s possible closing, at least one employee knew it would be kept open.  “I never thought they would close it,” said Vincent Camaj, part of the body assembly team who has been at SHAP for nearly 11 years. “It’s a new plant, centrally located and close to the freeways. I always thought it would be a waste to shut it down.”

Sterling Heights Mayor Richard Notte, who said he spent 45 years working in the automotive industry (though at another U.S.-based OEM), said the Sterling Heights City Council “never hesitated” when it needed to come up with abatements to help keep the plant open. Notte also drew roars of laughter when he said the initial July announcement that the plant would remain open was “almost as good as sex. Today is like foreplay.” SHAP is home to the redesigned 2011 Dodge Avenger and the new 2011 Chrysler 200. Chrysler Group’s $850 million investment includes the construction of an all-new, state-of-the-art, 425,000-square-foot paint shop, as well as the installation of new machinery, tooling and material-handling equipment. In addition, a portion of the total amount will be invested in the local stamping facilities in Warren and Sterling Heights.

To read more about the Monday event, see this news release.

For more images from the event, see the Chrysler Communications Facebook Page.