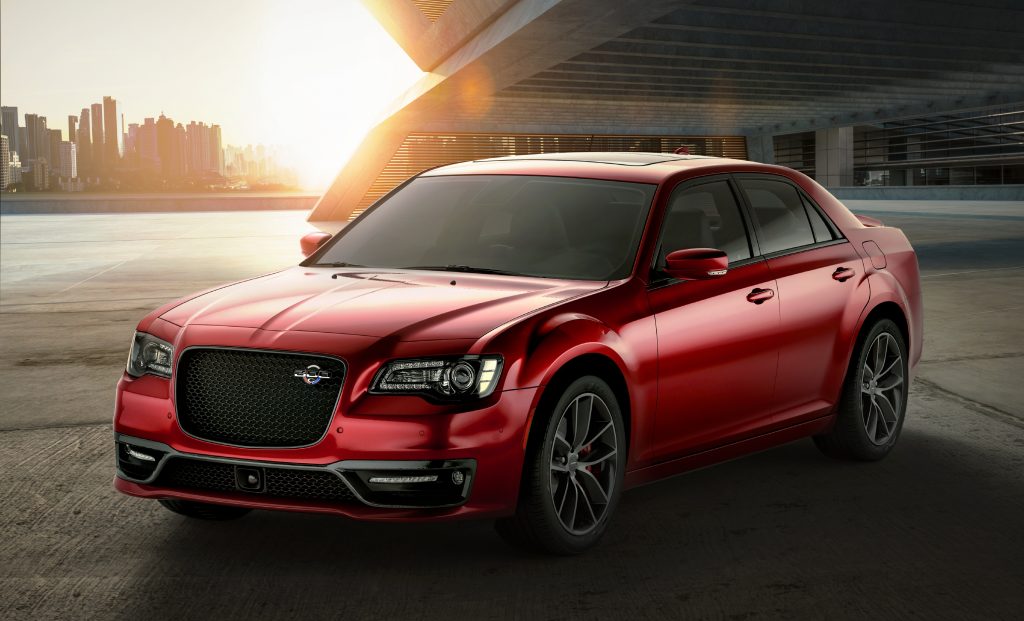 September 13, 2022 , Auburn Hills, Mich. – Chrysler brand is commemorating the nearly 70-year legacy of the Chrysler 300 with the 2023 Chrysler 300C, powered by a 6.4L HEMI® engine with 485 horsepower. The 2023 Chrysler 300C was revealed this evening near the Spirit of Detroit statue in downtown Detroit on the eve of media day for the 2022 North American International Auto Show.

The 6.4L HEMI-powered 2023 Chrysler 300C pays tribute to the Chrysler 300 and the end of an era — Chrysler 300 production will end following the 2023 model year. First introduced in 1955 and reborn in 2005, the Chrysler 300 has represented iconic American luxury and performance for decades.

A new iteration of the tri-color 300C badge ​dresses up the exterior on the grille and rear decklid, and the 300C rides on 20-by-9-inch forged wheels​ with all-season performance tires. The exterior carries black chrome accents on the grille and lower fascia, plus black headlamp and taillamp bezels. Three exterior colors are available for the 300C: Gloss Black, Velvet Red and Bright White.

The 300C packs a premium 19-speaker Harman Kardon audio system, and the 8.4-inch Uconnect infotainment system, as well as Android Auto and Apple CarPlay, comes standard. Advanced brake assist, Lane Departure Warning Plus and Full Speed Collision Warning Plus are just a few of the standard safety features, while comfort features include a heated steering wheel and heated and ventilated front seats​.

The 2023 Chrysler 300C comes fully equipped with a U.S. manufacturer’s suggested retail price (MSRP) of $55,000. Ordering reservations are available now at reservation.chrysler.com, through a process that features three simple steps: select an exterior color, select a dealer and submit a deposit.

Chrysler 300: Celebrating an Automotive Legend
With roots that include the breakthrough 1955 and 2005 models, the Chrysler 300 has represented style, sophistication and performance for nearly 70 years. Highlights of the Chrysler 300 include:

Chrysler Brand
The Chrysler brand has delighted customers with distinctive designs, craftsmanship, advanced innovation and technology since the company was founded in 1925. The Chrysler Pacifica continues to reinvent the minivan, a segment Chrysler invented nearly 40 years ago. Pacifica delivers an unprecedented level of functionality, versatility, technology and bold styling along with the most standard safety features in the industry and most advanced available all-wheel-drive system in its class. The available innovative plug-in hybrid powertrain takes this revolutionary vehicle a step further. It’s the first electrified vehicle in the minivan segment and achieves more than 80 MPGe in electric-only mode, has an all-electric range of more than 30 miles and a total range of more than 500 miles. Chrysler Pacifica is also the most awarded minivan over the last six years with more than 170 honors and industry accolades since its introduction as a minivan. The Chrysler 300 lineup delivers on the brand’s promise of accessible luxury, with iconic and elegant design, world-class performance, efficiency and quality. Chrysler is part of the portfolio of brands offered by leading global automaker and mobility provider Stellantis. For more information regarding Stellantis (NYSE: STLA), please visit www.stellantis.com.