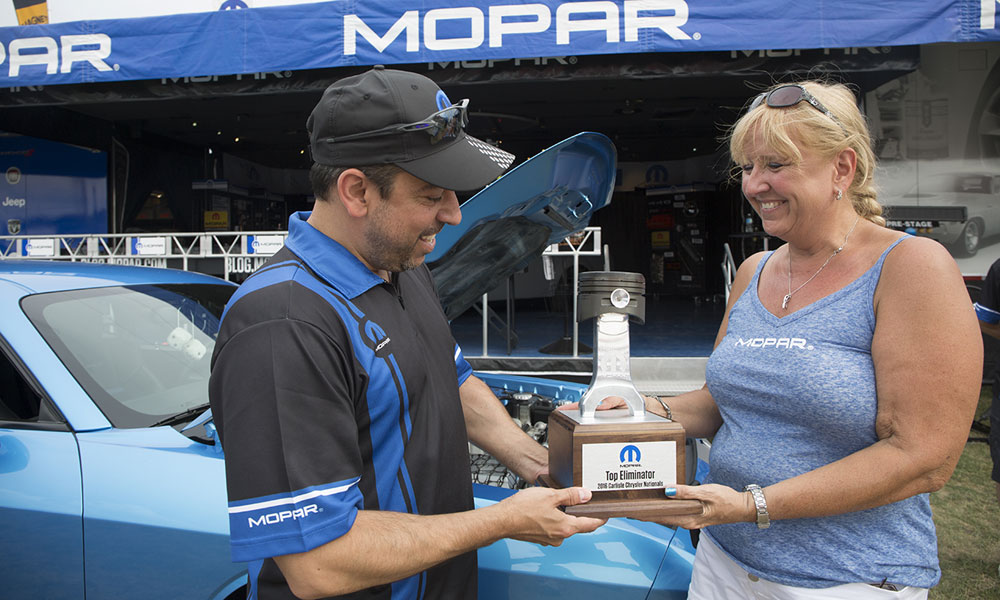 “I had a friend who bought a brand new Challenger SRT,” Newbauer recalls. “It was black. I saw it on New Year’s Eve and I’ve been in love with it ever since.”

Before the horns blared to mark the end of 2009, Newbauer had her car – a blue 2010 Dodge Challenger SRT. It took a little effort. Her dealer had the car on order, but with a sunroof and automatic transmission. “We had to ditch those,” she says. “But within three days of getting the car I had two marriage proposals.”

The modern muscle car has carried her from Cudjoe Key, Florida, near the southernmost point of the country, to car shows along the east coast. Now it has earned her recognition from Mopar as a winner of the Top Eliminator trophy awarded during the Carlisle Chrysler Nationals in July.

Newbauer and her Challenger will join JoJo Bartosh of Wisconsin and her restored 1957 Dodge W100 Power Giant pickup truck as part of the FCA US display during the Woodward Dream Cruise on Saturday, Aug. 20. Mopar awards the Top Eliminator trophy to enthusiasts who show dedication and excellence in preserving or modifying a vehicle from the company’s vast history. 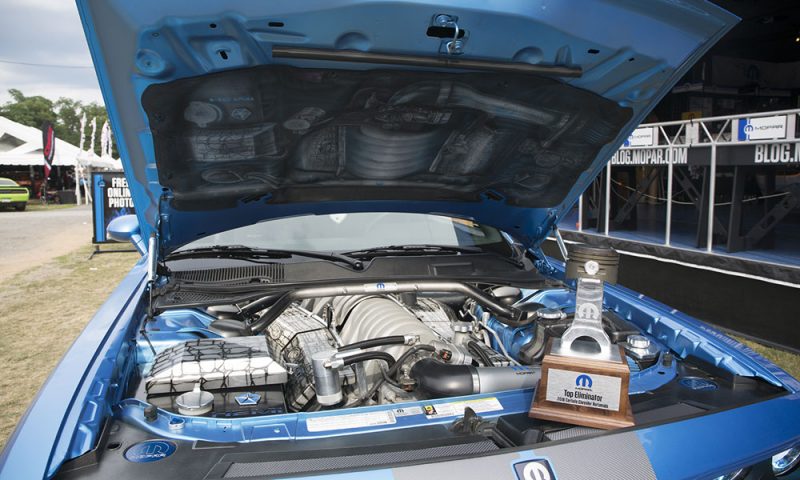 Notice the “ghosted” image of Theresa Newbauer’s engine bay on the hood insulator of her 2010 Dodge Challenger SRT.

At first glance, Newbauer’s Challenger is a bit of a “sleeper.” But raising the hood reveals she’s caught the bug for customizing her car. “It’s become a bit of a disease,” she acknowledges.

So far, the modifications have only been of the bolt-on type. Like many LX owners, Newbauer has dressed up her Challenger’s engine bay to really connect it with the rest of the car.

The main attention getter is the insulator attached to the underside of the hood. Newbauer bought a new insulator and hired an artist to paint onto it a “reflection” of the engine bay. It creates an eye-grabbing effect when the hood is open.

Newbauer says she gets her inspiration for things to do to her Challenger SRT by attending car shows and being a member of the online forum www.challengerforumz.com. “I have made so many good friends in the muscle car community,” she says.

That bond was cemented a couple years ago during a car show in Boca Raton. Newbauer recounts how, after the wheels were stolen from her car, others at the show pulled wheels from storage and their own cars to get her Challenger moving again for the 170-mile drive back to Cudjoe Key. Afterward, a forum member gave her a set of stock wheels he had in storage to replace the stolen wheels. “He wouldn’t take any money. He said, ‘If this can help bring a smile back to your face then that is all the payment I want,’ ” she says. 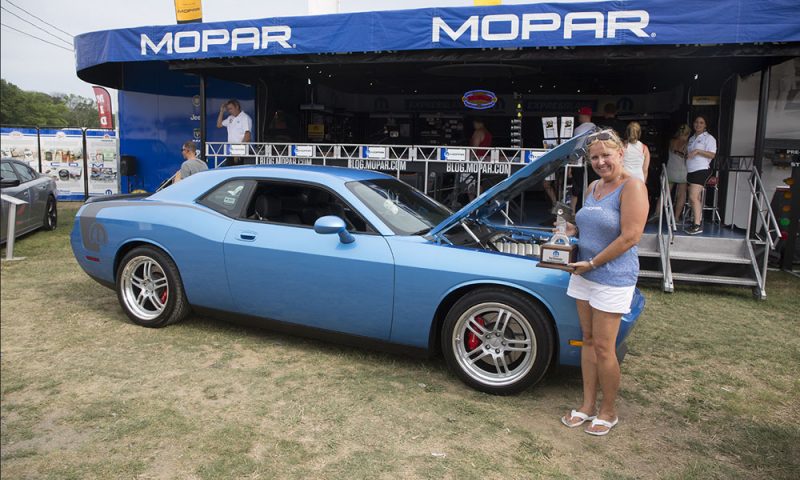 Theresa Newbauer holds the Mopar Top Eliminator trophy next to her award-winning Dodge Challenger SRT at the Carlisle Chrysler Nationals.

Newbauer traces her interest in Dodge and the Mopar universe back to her college days in her hometown of Brooklyn, New York. “I had a boyfriend with a ’73 Plymouth Duster and a friend of his had a 1970 Dodge Challenger 440 Six Pack. I so loved that Challenger; I cried when he sold it.”

That Challenger love was rekindled when Newbauer first saw photos of the Dodge Challenger Concept that was unveiled at the 2006 Detroit auto show. “I said I’m going to get that.” She had migrated from Brooklyn to the Florida Keys in 2000 for her job and was in the market for a new car after Hurricane Wilma swept across Florida in October 2005.

Newbauer’s daily driver is a Ram 1500 pickup with the 5.7-liter HEMI V-8. But her Challenger is not a trailer queen.

The annual show in Carlisle, Pennsylvania, has been on her bucket list since she bought the Challenger. So in mid-June she drove to a car show in Pigeon Forge, Tennessee, and arranged to park it in the garage of a forum member in nearby Virginia. She flew back a month later, picked up the car and drove it to Carlisle.

Her plan was to drive home from Carlisle, a trip that would add about 1,300 miles to the Challenger’s odometer. But then she was handed the Top Eliminator trophy by Mopar and her plans changed.

“I couldn’t believe it when they told me I won. It was surreal,” Newbauer says. “You just look around the field at Carlisle and see all the cars and all the work that has gone into restorations and modifications. It’s amazing.

“When I sit and think about winning, it’s validation for all the work and planning and sitting online and looking for just the right pieces for my car. I’m still pinching myself,” she says.

For the past few years, the Top Eliminator winners from Carlisle and the Midwest Mopars in the Park have been put on display at the FCA stand during the Woodward Dream Cruise in suburban Detroit.

The Woodward Dream Cruise has also been on Newbauer’s bucket list. So after Carlisle she put her Challenger back in the garage in Virginia until it gets transported to Detroit. Afterward, she plans to drive it back to Cudjoe Key, a trip of about 1,525 miles.

We know how she feels.